The Federal Government has trained Community Mobilisation Officers (COMOs) of the National Orientation Agency (NOA) on digitisation and registration, towards effective implementation of phase two of the Government Enterprise Empowerment Programme (GEEP) 2.0 in Kogi State. 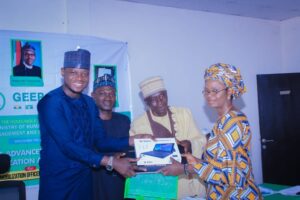 Speaking at the event on Thursday in Lokoja, the Minister of Humanitarian Affairs, Disaster Management and Social Development (FMHADMSD), Hajia Sadiya Farouq, said the GEEP was under the FG’s National Social Investment Programme (N-SIP) designed to tackle poverty and hunger across the country.

She emphasised that the GEEP 2.0 was specifically designed to give access to credit for poor and vulnerable people including persons living with disabilities in the society.

The Minister, who was represented by Comrade Amana Ohwu, the Principal Community Development Officer of the Ministry, said the training was to acquaint participants with the new criteria of registration as well as the new GEEP Digitisation Application.

She explained that the Ministry had successfully shortlisted GEEP beneficiaries in first phase of the programme across the 774 local government areas nationwide, and currently on the process of cash disbursement.

Farouq added that Tablets had been made available to the COMOs to be used for digitisation, aimed at ensuring seamless programme implementation, and bring the participants up to date with the new strategies and requirements for phase two registration.

She enjoined participants to ensure better and improved implementation process, stressing that its success depend on the quality and quantity of data they generated.

The minister, however warned the officers against any form of infractions and extortions of the potential beneficiaries, stressing that any erring official will be brought to book.

”So, I am using this opportunity to challenge all of you to double your efforts to ensure a better and improved GEEP 2.0 implementation process going forward.

”Consequently, it is important to note that any State N-SIP or NOA official found culpable of extorting and intimidating any beneficiary will be brought to book,” Farouq said.

Onyekehi disclosed that over 7,000 beneficiaries had been shortlisted and ready for cash disbursement out of over 50,000 registered persons in phase one under GEEP across the 21 local government areas of Kogi.

He said the GEEP beneficiaries were categorised under the MarketMoni, for vulnerable market women; TraderMoni, for petty traders; and FarmerMoni for local farmers; to boost their various enterprises.

According to him, the beneficiaries of the MarketMoni and TraderMoni will receive loan disbursement of N50,000 each, while FarmerMoni will get N300,000 each to be disbursed through Access Bank PLC.

Onyekehi, who doubles as the Special Adviser to the Governor on Special Projects, also warned the officials against extorting the beneficiaries, saying no infraction would be tolerated.

While praising President Mohsmmadu Buhari for the initiative, Onyekehi commended the Minister for ensuring proper and effective implementation of all the components of N-SIP across the country.

He elogised His Excellency, Alhaji Yahaya Bello, for his support and tireless commitment to the full implementation of the NSIP programmes which according to him, had benefitted Kogi citizens immensely.

”The Government under the leadership of His Excellency, Alhaji Yahaya Bello, operates an open governance that is accessible by all, and committed to good governance, transparency and accountability,” he said.

On his part, the State Director of NOA, Mr Mohammed Abdullahi, urged the participants to take the job seriously and provide a credible data, as they had been provided with all the necessary tools, saying no excuse would be tolerated.

Abdullahi assured the Minister and the State Government that the digitisation and registration process would be strictly monitored by NOA to achieve the desired results.

He commended the His Excellency, Governor Yahaya Bello, for creating an enabling environment in terms of adequate security which had ensured seamless registration exercise.

Two of the participants, Hassan Garuba from Lokoja, and Mrs Grace Aminu from Ijumu LGA, commended the federal government for the GEEP implementation process, and promised to deliver credible and reliable data.

The State Focal Person, Onyekehi presented A Tablet and other tools to each of the 21 participants on behalf of Minister.

The 21 participants were the Community Mobilisation and Orientation Officers (COMOs) who are NOA staff from the 21 local government areas of Kogi State.