The recently concluded APC presidential primaries might have come and gone accompanied by its entourage of public perceptions of what the whole activities looked like and most especially the fortunes of the party in future elections. It was also held against all postulations that the primaries was going to consume the APC as a party. Realities on ground have so far proven those assertions as false. 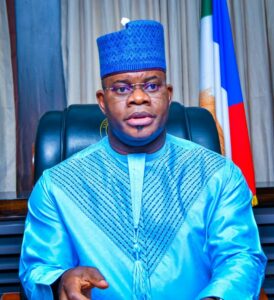 Away from the party primaries, One of the major contestants, Governor Yahaya Adoza Bello of Kogi State who happens to be the most youthful amongst all has earned himself a national reputation and accolades by managing large political campaigns, visits and consultations, turning them into media-driven extravaganzas with emphasis on sound bites and advocacies about how youths ought to be considered for leadership positions and how the most disadvantaged of all regions ought to be given a chance to have a fair share of what national governance should be. Expectedly, his win rate was astonishingly high. That probably was loud enough except for the political manipulation of the old order and the gullibility of resident hates who felt Governor Yahaya Adoza Bello was not ripe for governance at that level. I kept wondering when it will ever be ripe for a youth to become the president of Nigeria.

Generally, there are perceptions that during electioneering campaigns of all sorts, governance at all levels suffer. This could be true as precedence have shown that developments and governance are almost halted whenever the nation approaches such season. Contemporary happenings have also laid credence to same notion with the incessant strike actions by the Academic Staff of University Unions, the skyrocketing rate in PMS and other allied product prices with an onward effect on the prices of food stuffs and other consumables, near grounding of the Nigerian aviation sector and growing trends in insecurity. The lack of will by the government to this needs has significant correlation with “the Season”.

Back to Kogi State Nigeria, Governor Yahaya Adoza Bello’s participation in the recently concluded presidential primaries has no effect on the development of Kogi State as earlier postulated by some of his adversaries. They had earlier claimed to high heavens that kogites should forget about governance until the governor leaves in 2024. The governor terminated all their arguments by ensuring the conversion of Kogi State into a construction site. While the whole activities leading to the primaries were ongoing, Kogi State birthed a new university named the Confluence University of Science and technology in Osara, the various township roads in Okene, Kogi Central experienced massive constructions accompanied with solar street lights, the okene greater water project is also recieving massive attention. It is key to also know that the iconic central magnificent central reference hospital in Okene was built from the scratch. This hospital contains world class medical facilities that offers the potential to put a halt to medical tourism in Nigeria. The edifice is not only qualitative in structures but also in contents. This is expected to drive the IGR of the state to a significant level.

Kogi west also had its own share of development while the governor was aspiring for the number one position in the country as kabba township roads received a significant face lift accompanied with solar street lights, the nearly broken down state specialist hospital built by the previous regimes in the state receieved a world class boost. Additions have been made to the edifice and has currently added to the landmark of the state. The iconic Ganaja junction flyover have also been completed as we speak and put to use without any ceremonial commissioning as doubting Thomases have been clamouring. The flyover have reduced travel time in the state capital and has eradicated to almost totally the traffic logjam usually experienced at that axis. It is also the first of it’s kind in the state. The signature GYB Model medical facility rated a second class was also constructed and completed while the Governor was toiling towards getting the APC presidential ticket. this will serve the good people of Kogi LGA, some parts of Niger State, Nassarawa and travellers along the abuja – Lokoja Corridor. It is imperative to also note that one of the best if not the best model science school in Northern Nigeria was constructed from scratch and completed by the governor during this same political season. The school which is a public school boost of facilities that are obtainable in the best of private international schools in Nigeria.

Driving through the streets of Lokoja, the state capital also shows a giant leap in development of road infrastructures. A departure from the old picture that had hitherto bedeviled the ancient mega capital. The kpata-kabawa traditional area beach embarkment project started by the last regime in the state is almost nearing completion as the governor has made funds available for the completion of the project. This will add value to the once shanty looking water front.

The Kogi East Senatorial district have also experienced government midas touch as the Prince Abubakar Audu University teaching hospital in Anyigba have been built and completed. This will serve the abandoned medical school of the prince abubakar audu university. Several roads were also touched during this electoral season. Worthy of note is the aged long “Ogane – Aji erosion ravaged area of anyigba where the state through a counterpart arrangement fixed the ravaged area while also restoring lands around the area. In olamaboro and other erosion prone areas, the state government has performed credibly well by rising up to the occasion.
Administratively on several occasions, the governor has through his deputy Chief Edward David Onoja performed constitutional roles in ensuring the state runs fully at its optimal level. Executive functions such as swearing in of State Chief Judges, state high court judges, customary courts and magistrates. Fiscal documents such as state budgets are presented to the state assembly as at when due. The traditional institutions received an upward boost during this season by way of upgrade in status and grading of stools. Major traditional stools that were vacant for long were filled and confirmed by the state government.

The key purpose of any government installed by the people which is the security of lives and properties were upheld and sustained. Aside from occasional flashes when preying eyes of security agencies are away.
Factually, Governor Yahaya Adoza Bello has been able to sustain the tempo of governance as immediately after the presidential primaries of the APC, he retreated back to the state and started a marathon inspection of project sites to ascertain the level of work done and to make corrections where necessary. This acts have been applauded by even his strong critics who had hitherto made claims that Governor Yahaya Adoza Bello has no project to show for his almost two terms in office.

For me, by the time this youthful Governor will be rounding up his tenure as a governor of Kogi State, the state capital would have attained the desired status befitting of a mega city.