Several groups met at Abejukolo in Omala LGA today being the August 13th, 2022 under the aegis of the _*”AbuIbro Season two”. 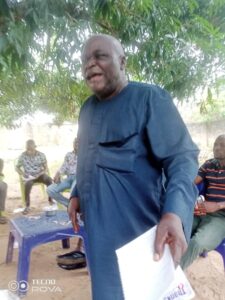 The groups were drawn from across the eleven wards of Omala Local Government Area. They had irrevocably reached an agreement to ensure that their various groups are converted into AbuIbro 2023 political platform for positive governance beyond the 2023 election year.

They spoke in unison that after series of findings and consultations, they had agreed that Alh. Abubakar Ibrahim Idris has what it takes, to deliver the local government, kogi east and the Kogi State in general out of the hands of the clueless administration. The groups also stated that the endorsement of Alh. Abubakar Ibrahim Idris to run for the upcoming governorship elections of Kogi State is based on the best their general interest to salvaged the good people of Kogi State.

Speaking at the meeting was, Hon. Andrew Ede who spare-headed the meeting said, ‘that Ibro has done well for the state in the past as governor, and his son can not afford to let us down,  and for this singular reason all of us have decided on our own to endorse Alh. Abubakar Ibrahim Idris  because he is the one of the best candidate that has all it takes to deliver us Kogite. Hon. Edeh, again stated that the last election was enough to teach us a fundamental lesson. It’s no news that capacity is very vital key during the upcoming elections.

Hon. Hassan Salifu          (aka Dangote), said Ogodu people have made up their minds to support Alh. Abubakar Ibrahim Idris because of the good will his  father had and what Ibro has  done for Ogodu district and Omala at large.  The Ogodu people will ever be grateful to Alh. Ibrahim Idris, the road constructed from Egume down to Ofugo in Ankpa Local Government and they also believe that the road from Ibado , Ojiaji down to Olla which Baba Ibro didn’t completed before he left the government, his son will come and complete it for us.

Dino Benjamin from Bagaji ward stated that, the last time our people made a mistake for not voting Abu Ibro we all saw the result at least, But this time around, they are going to give him maximum supports infact hundreds percent in the upcoming election in Omala LG.

From Opada Ofejiji ward  Hon. Daniel Onailo reiterated that God is involved in this journey, stating that the caliber of persons who have keyed into “Abu Ibro Season 2” are over 287 people from Omala local government alone, and over two thousand five hundred individuals in the entire Kogi State have converge under AbuIbro season 2 to support this noble project and this time around Omala LGA will surprise everybody. He added that all votes from their zone will be for Alh. Abubakar Ibrahim.

Hon. Zubairu Jibrin, one of the PDP‘s stakeholder from  Olla pointed out that they have already made up their minds in the meeting today because their convictions and believe that he is going to be a good governor if given the chance and opportunity through our collective vote for him to lead the state.

Eneojo shaibu said, as he speaks majority of their people who left the party out of annoyance are back to support AbuIbro.  He also mentioned that those who worked against Ibro and his son today are not finding it easy.

He also point out, that the primary was left to free and fair AbuIbro would have won the election. He further advised that party PDP should take note of these.

While Hon. Odiba Isa Amidu, of Opatala ward said, the most happiest side of it all is that  Hon. Shittu Idris Haruna is at the forefront of this project. They can’t afford to make another mistake again, PDP should go back to the drawing board, leave sentiments aside, that PDP should not  allow jealousy to becloud members of the party.

He stated that God gives power to whoever he likes, any time He wants and to any family.

Hon. Huseini Abdullahi of Ogodu joined his voice with others that, they must make sure that those who’ll be delegates from Omala LGA will be properly screened to avoid what we saw at the last PDP governorship primary Lokoja township stadium. He said this time around, there will be no room for any mistakes anymore and some fake and mischievous leaders who claim to be close to Baba Ibro but only to cause troubles among us because of their selfish interests should shelved  their interests and join the wining teams. And all youth groups present have agreed in order to throw their weights behind in full endorsement. He further said, we need everybody but we must be careful.

The host, Hon. Mathew Akawo from Icheke ward said because AbuIbro is their son and for that reason, they are fully in support of this endorsement.

Hon. Monday Dan Haruna from Ojiaji ward, said, what they need is a good leader and that they have decided to support Abu Ibro fully because of the good leadership of Hon. Ugbede Abimaje, the leader of Ojiaji ward and the support of their elder Hon. Hasan Baba and others who had given them the directive to support this beautiful endorsement of Alh. Abubakar Ibrahim and they will make sure that everything go down well with his candidacy.

Hon. Shittu Idris Haruna who was invited for the endorsement said, he can’t but express his profound happiness in witnessing today’s great endorsement of Alh. Abubakar Ibrahim, he said the masses want a honest and leader they can access and talk to. While, speaking a lot of people came in mass to endorse a candidate on their own. He prayed that the end shall be fruitful to the local government the state at apex.

Hon. Ede Andrew end the meeting with prayers and  said, over two thousand youth groups across the state have sign the endorsement letter and their names will soon be published.