The Vice-Chancellor, Federal University Lokoja, Professor Olayemi Akinwumi has prayed for God’s intervention over the increasing reports of death amongst staff and students of the University during this protracted industrial disharmony in the Nigerian Universities. 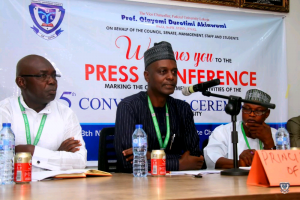 The Vice-Chancellor made the call after attending the requiem mass in honour of late Mr Gerald Ojone M. Akor, a 400-level student, and Miss Ruth Fatima Ocheni, a 200-level student from the Department of Banking and Finance of the University, whose death occurred on 2nd and 11th August, 2022 respectively.

Sadly again, and just as Professor Akinwumi along with members of Management was struggling to contain his already frayed emotions over the unfortunate events that have overtaken the University, he received another sad news of the demise of Mr Abdulsalam Anate of the Environmental Health Unit, and Mr Jeremiah Sunday, a Clerical Staff in the Dean’s office, Faculty of Arts. Late Mr Anate whose shocking death occurred on 11th August, has since been buried according to Islamic rites.

The Vice-Chancellor who noted that the level of hardship in the country has reached an unbearable height sued for a speedy and amicable resolution of the current industrial actions by ASUU and other Unions in the Public Universities.

Professor Akinwumi lamented over the difficulties being faced by federal workers, particularly those in the education sector who are passing through unimaginable stress and financial burdens in providing for their families, as well as the students who are now exposed to all forms of peer pressure due to their idleness at home occasioned by the impasse between the Federal Government and all the University-based Unions.

The VC, however, encouraged the students to seize the opportunity and enroll in skills acquisition, and engage their minds in productive ventures while waiting for the strike to be called off.

Similarly, he admonished FUL staff to be their brother’s keeper at this trying period, adding that those whom God has blessed and have little more than the other should extend kind gestures to those who have none, and be on a constant lookout for one another until the current imbroglio between the government and university unions is resolved.

Following the tragic demise of Gerald Ojone Akor, the Vice-Chancellor has announced the institutionalization of an award in honour of the late 400-level student – as the most disciplined student – to be awarded at every Convocation Ceremony of the University.

While grieving over these irreplaceable losses, Professor Akinwumi prayed for the repose of the departed souls and extended deep condolences to their respective families, friends, and colleagues, as well as the entire University Community.