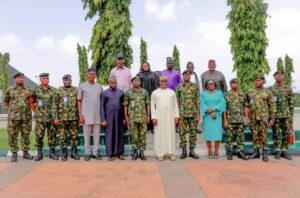 The governor pointed out that the historic and geographic location of the state validates such request.

Bello who made the commendation and request on Monday while receiving a courtesy visit from the Flag officer Commanding Central Naval Command, Rear Admiral I Abbas added that the command centre would serve a better purpose if such relocation was approved.

Governor Bello hailed the Chief of Naval staff, Rear Admiral Awwal Zubairu Gambo for repositioning the Nigeria Navy by being highly dutiful, adding that during his tenure pestering issues of bunkering, theft and other criminal activities on the waterways have grossly reduced.

He noted that the Commander’s courtesy call was a huge show of comradeship and togetherness asserting that his readiness to serve the Nigerian nation was laudable.

The governor also appreciated Commodore K I Odubanjo, Commander NNS LUGARD for the great job done and professionalism he has displayed in the state, urging him to do more for the people and the state.

Governor Bello promised that his administration would continue to appreciate security operatives and give them maximum support so that there job would be made easy.
In his opening remarks, the FOC central Naval command, informed the governor that he was in the state to acquaint and familiarise himself with operations of units under his command, examine their operational activities with a view to make inputs and find out challenges.

He thanked the governor for the support he has been providing to the base, noting that he was well aware of how the state governor accommodated and rendered support towards the establishment and its operation in the State.