A former Senior Special Assistant on Student Affairs to Gov. Yahaya Bello, Hon. Omonu Joshua aka Levels Pumping has described Alhaji Friday Idachaba as a quintessential personality, whose commitment to the development of the State remains unquantifiable. 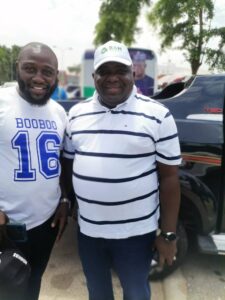 The Former Gov. Yahaya Bello‘s aide made the disclosure in a statement to celebrate the birthday of Alhaji Friday Idachaba, described the celebrant as one reputable Indigenous contractor that has made the State and Nigerians proud in his delivery of quality and standard projects.

Hon. Omonu while wishing and praying for God to grant Alhaji Friday Idachaba long life and prosperity, described him as a positive reference that men and contractors of good conscience are still available in the country.

Hon. Omonu says he joined million other well wishers in Celebrating an icon of humility, simplicity, hardwork, one dedicated to the cause of service to humanity but above all, a shining example in right doing and doing what is right.

Hon. Omonu concluded by saying that it is his prayers for Hon. Friday Idachaba that he would experience good health and prosperity in the land of the living.