The immediate past Publicity Secretary of the Peoples Democratic Party(PDP) in Kogi State, Honourable Bode Ogunmola has described the appointment of Senator Dino Melaye as the PDP’s presidential campaign spokesperson as well deserved. 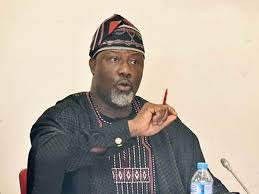 Honourable Ogunmola who is also PDP candidate for Ogori-Magongo Constituency in next year’s elections, expressed confidence in the ability of the former Kogi West Senator to deliver on the assignment before him.

He described Senator Melaye as a fearless voice of the voiceless who is admired by many Nigerians for his courage in speaking truth to power, noting that he is convinced he would attract enormous goodwill and support for the party.

According to him, “ Senator Dino Melaye is a great asset to the PDP. He is a politician with vast experience in strategies and political communications . For us in Kogi PDP, it is a cheering news that an illustrious son of the state is saddled with the responsibility to market our presidential candidate”.

He expressed optimism in the ability of the PDP to reclaim power next year with Atiku and Okowa ticket, saying Nigerians are yearning for a leadership that would guarantee their security, safety and welfare.