YOU WILL NOT WALK ALONE – FUL VC ASSURES PROF. FRANCISCA OLADIPO AT INAUGURATION AS VC, TAU

The Vice-Chancellor, Federal University Lokoja (FUL), Professor Olayemi Akinwumi has assured the newly inaugurated Vice-Chancellor of Thomas Adewumi University (TAU), Oko-Irese, Kwara State, Professor Francisca Onaolapo Oladipo that she would not walk alone, expressing confidence in her capacity of taking the Institution to an enviable height. 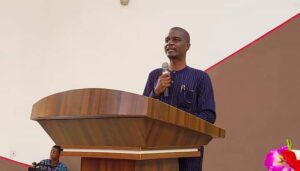 Professor Akinwumi made this known during the inauguration ceremony of Professor Oladipo as the second substantive Vice-Chancellor and Chief Executive of TAU which took place on 1st August, 2022 at the University Auditorium in Kwara State. 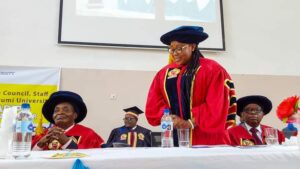 Recall that the Board of Trustees of the fast-growing Institution and one of Nigeria’s foremost STEM ecosystems announced the appointment of the erudite Professor after an extensive global search and a unanimous vote in favour of the renowned ICT don and excellent researcher of international repute. 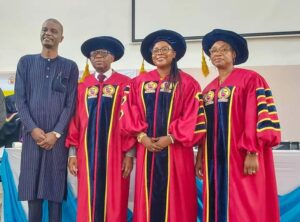 In his remarks at the colourful event, the Vice-Chancellor, who said that he is a fan of Liverpool Football Club, made reference to the Club’s anthem that says: “You’ll Never Walk Alone,” assuring the erudite Professor of Computing and Data Scientist of not only his unflinching support but also that of the entire Management and Staff of Federal University Lokoja.

Professor Akinwumi who was highly elated, thanked the Founder/Chancellor of TAU, Engr. Dr. Johnson Bamidele Adewumi for finding Professor Oladipo fit for the plum position. He equally expressed deep gratitude to the Chancellor for the appointment of Mr. Usman Abdulkadir Yakubu, another distinguished staff of FUL and administrator par excellence, as TAU’s new Registrar. The Vice-Chancellor wished them tremendous success in piloting the affairs of the Institution.

The epoch-making event was well attended by dignitaries including Principal Officers and Management Staff of FUL, Vice-Chancellors of other Universities, traditional rulers, families, and friends, as well as staff and students of TAU.

Also, the Rector, Kogi State Polytechnic, Lokoja, Dr. Usman Ogbo, who earlier attended the joint Senate/Management sendoff programme for Professor Oladipo at the FUL Permanent Site in Lokoja, also graced the inauguration in honour and show of solidarity to the distinguished academic.

Until her appointment as TAU VC, Professor Francisca Oladipo was the Head of Computer Science Department and Pioneer Director, Quality Assurance in FUL.

Interestingly, she is the first female to be elected as Senate Representative in Governing Council of the University in 2018. The Fellow of the Nigeria Computer Society (FNCS) and Tech Diplomat is also the Executive Coordinator, VODAN Africa and Asia – a collaboration of researchers and health practitioners across fifteen African countries focused on improving health data analysis and strengthening national capacities for health data.