The Kogi State President of Nigeria Union of Local Government Employees, Comr. Tade Adeyemi has begun his new tenure by soliciting the financial backing to all the promotion exercise conducted by the Local Government Service Commission to boost the morale of council workers. 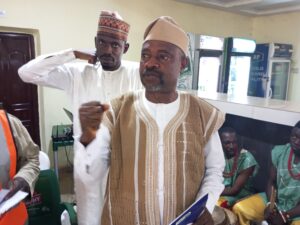 Comr. Tade Adeyemi made the appeal during his opening remarks at the 7th State Quadrennial Inauguration of the newly elected Executives to run the affairs of NULGE in the State, urged for the improvement of salary payments in view of the cost of living associated with the current increase in Petrol and domestic consumable goods nationwide.

Comr. Tade appeal to the State Government to consider the issue of clemency for Local Government Staff affected by the past screening exercise, explained that most of the staff affected are yet to be cleared and are still reporting to duty.

On the issue associated with Diploma Certificates, Comr. Tade appealed for the policy to be looked into with human face so as to give adequate time for staff to make up for the inadequacies involved.

Towards ameliorating the impact of the current Petrol increase and to aid transportation problems for workers, solicited the engagement of motorcycle loan scheme for council staff that would be repayable on two to three years instalment basis.

The newly inaugurated solicited for the provision of basic consumable foods for council workers to be provided by legitimate deductions at the local government level.

While pointing out that for the sake of proper data capturing of council workers, Comr. Tade proposed an identity card program, said this will enable NULGE have an accurate number of workers and provide adequate planning for their welfare.

The NULGE Chairman added that in view of dwindling checkup dues, said the union seeks for an enhancement financially to enable NULGE make adequate provision for facility enhancement and infrastructural upliftment of the union’s facilities towards enhancing effective service delivery.