Women Group Condemns Murder of Cynthia Ago By Husband.

Jul 30, 2022 Women Group Condemns Murder of Cynthia Ago By Husband. 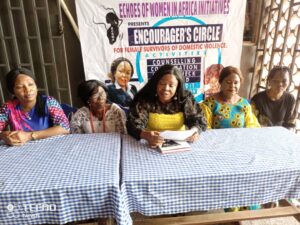 In a statement by the founder of Echoes of Women in Africa, Louisa Ekhomun-Agbonkhese lamented that though Nigeria is signatory to several conventions which call for prevention, protection, prosecution of papetrators of Gender Based Violence GBV, the incidences of domestic violence is still prevalent in Edo State and Nigeria at large pointing out that the menance constitute danger to a fruitful family life.

According to the statement, “as a country, Nigeria has signed multiple conventions which call for protection, prevention, investigation, prosecution, punishment and effective remedies to deal with Gender Based Violence that includes domestic violence.
“At the national level, Violence Against Persons Prohibition Act (VAPPA) has been passed with states domesticating it into law. However, reports of attacks on women and girls continue to make headlines. A nation that is getting engulfed in armed conflict by bandits and terrorists causing deaths of children, women, men and kidnapping of hundreds of thousands in communities on one hand, domestic violence on the other hand is endangering the family unit”.

While condemning the killing of women by male partners, the statement equally condemned the killing of men by their female partners, just as it emphasised the serious negative effect domestic violence has on the social, economic, and public health of victims and called for concerted efforts, including awareness creation, strengthening prevention mechanisms to stem the menace.

“Women are battered, threatened, neglected, forcefully ejected and eventually killed for flimsy excuses. Domestic violence is a serious social, economic and public health issue. The impact is difficult to articulate on adults, children, the family and the government.

“There is an urgent need to enhance response, meet the needs of survivors, and strengthen prevention efforts to achieve the goal of ending domestic violence in Edo State and in Nigeria.