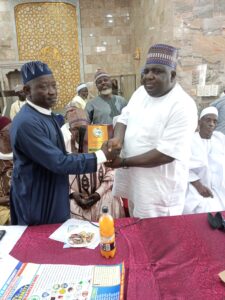 The outstanding security architecture and infrastructure put in place in Kogi State that has made the State the most peaceful state in the country has been described as an unprecedented achievement that would and should be commendable. 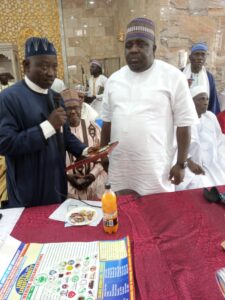 Hon. (Alh) Friday Idachaba, CEO Hamif Real Estate Nig. Ltd made the disclosure after he was honoured by Kogi State Muslim Organization (KOSMO), under the auspices of Jama’atu Nasril Islam JNI with an award of Excellence, described Gov. Yahaya Bello as the best to have happened to administration in the State since it creation. 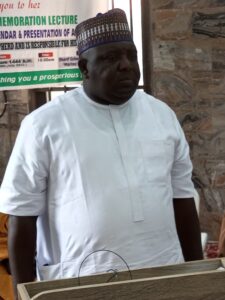 The Outstanding award of Excellence conferred on Hon. (Alh) Friday Idachaba as an indigenous Contractor KOSMO is proud of and for supporting the Muslim Ummah in the State was made at the 1444 AH Hijrah Commoration Lecture as well as the unveiling the 1444 Hijrah calendar and presentation of award held at the Sharif Ishaq Aboki Mosque, Marine Road, Lokoja.

Hon. (Alh) Friday Idachaba according to KOSMO is on record to have built legacy projects across the State, a feat that has earned him accolades across the country, described it as first of its kind amongst indigenous contractors.

KOSMO also appreciated Alhaji Friday Idachaba for being on record to have supported the propagation, advancement and support to Islam ummah in the State, said he has proven to be a leading light that should be emulated.

Hon. (Alh) Friday Idachaba disclosed that while people are running away from Abuja, the nation’s capital and can no longer sleep with their two eyes closed, expressed appreciation that in Kogi State people are walking freely and doing their businesses without fear of insecurity.

Hon. (Alh) Friday Idachaba urged the country to come and learn from Gov. Yahaya Bello, said his magic wand has fought insecurity in the State, assured that with his antidotes on insecurity as well as the security architecture put in place, the Country would once again become a safe place to live in.

Hon. (Alh) Friday Idachaba promised to continue to sustain the momentum of making indigenous Contractors proud in the country, said the enabling environment Gov. Bello has created has helped doing business in the State encouraging.

While he promised to sustain the feat noticed by KOSMO which he explained came to him as a surprise, urged other investors to come to Kogi State, assuring that in Kogi, Gov. Bello has positively turned around the fortune of Indigenous Contractors.

Hon. (Alh) Friday expressed appreciation to KOSMO for honouring him with the award, promised to continue to do more for humanity and for the Islamic religion and its adherents across the State.

He promised to sustain his support in rebuilding schools, scholarship scheme, empowerment, assisting with the payment of medical bills, said his passion for humanity is borne out of the need to fulfill the requirements of Allah as contained in the holy Quran.

Highlights of the lecture presentation to mark the annual Hijrah Commoration was the unveiling of the Hijrah calendar where Alhaji Friday supported with the sum of N500000.

A lecture on the Lesson in leadership from the Hijrah with the topic: Everyone of is a shepherd and is responsible for his flock was presented by Imam Abubakar Yusuf- Abdullahi of the Kogi State University Anyigba.