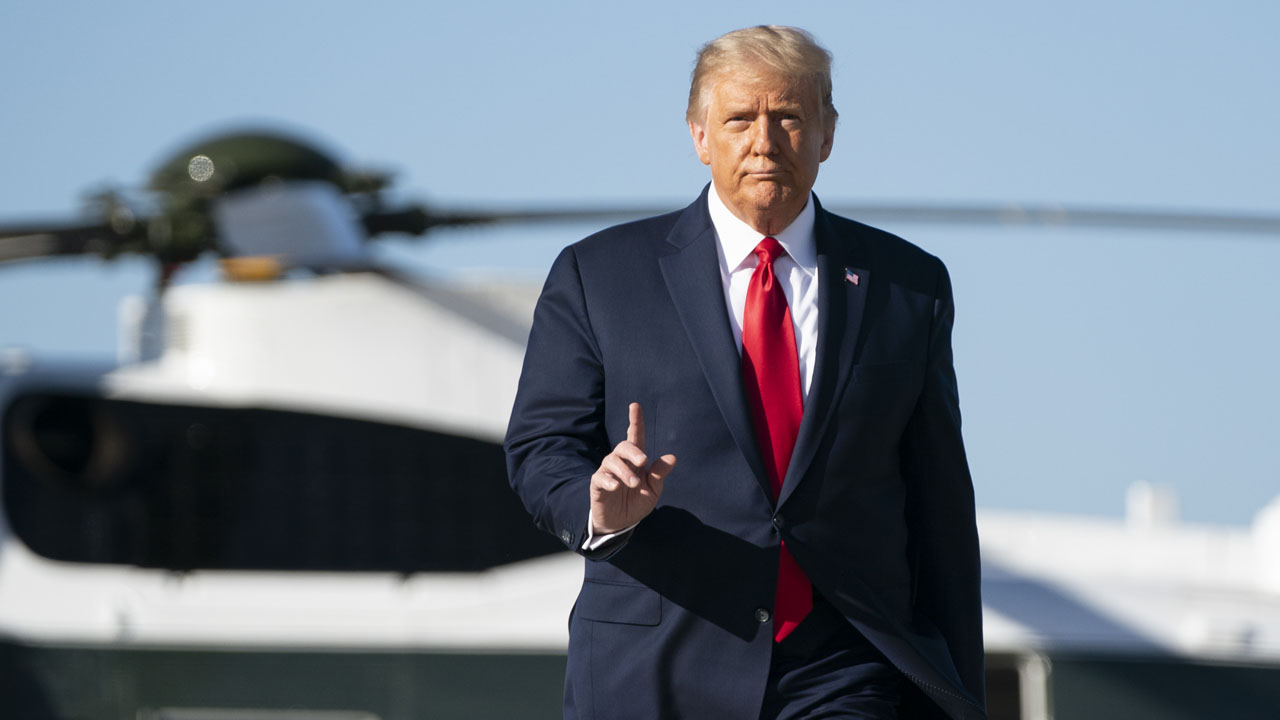 US President Donald Trump arrives to board Air Force One at Joint Base Andrews in Maryland on October 14, 2020. (Photo by Alex Edelman / AFP)

The United States presidential election of November 3, 2020 eclipsed the election at the same time for all seats of the U.S. House of Representatives, one-third of the seats in the Senate, governors of eleven states and two U.S. territories, state legislatures, state judges, and municipal or other local positions. Voter initiatives (plebiscite) were also voted on in some states. Yet, even though global attention was captured by the presidential election, many may be surprised to learn that voters did not technically vote to elect a president on Election Day. That is because the United States has a convoluted, and vulnerable, process for electing the president, of which the citizens’ vote on November 3 was only the first of three phases. The other phases of the election are, respectively, the Electoral College and the meeting of the Congress to count and announce the votes of the Electoral College. Where no candidate for President or Vice President is able to win a majority of the Electoral College votes, Congress chooses the President and Vice President. This process has barely evolved in over two centuries. It lacks clarity and critics generally consider it a crisis waiting to happen. Could 2020 be the year?

Under this system, unlike what obtains in almost every other presidential election in the world, the candidate who emerges as president upon the completion of the third and final phase may not necessarily be the candidate who scored the highest number, or even a majority, of the votes cast on November 3. The majority vote-winner lost the presidency so far five times: Andrew Jackson (1824), Samuel Tilden (1876), Grover Cleveland (1888), Al Gore (2000), and Hilary Clinton (2016). In the last case, Clinton received 2.8 million more votes than the candidate elected president, Donald Trump. Two consequences of the American method for choosing the president, invented in the 18th century, underline its democratic deficit. First, it is not uncommon for presidential elections to produce no candidate winning the absolute majority (i.e. 50 percent + 1) of the popular vote. Only half of the eight elections between 1992 and 2020 produced a winner with a majority of the votes. Second, presidential election campaigning is only intense in the few states that are considered competitive, the ‘battleground’ or “swing” states. Candidates barely campaign, and sometimes do not bother to show up, in states considered safe for the opponent. In the 2004 presidential election campaign, for example, 45 per cent of the total advertising expenditures by the Republican and Democratic candidates was spent in Florida and Ohio alone.

This essay briefly explains the three phases of the United State presidential election.

First Stage (November 3): Election Day
Section 1 of Title 3 of the U.S. Code prescribes that the presidential election shall hold in every state “on the Tuesday next after the first Monday in November, in every fourth year succeeding every election of a President and Vice President.” This year, the day fell on November 3. This provision, strictly, designates the day for the appointment of presidential electors. Thus, the 150 million Americans who voted on November 3 were voting to determine the composition of the Electoral College rather than immediately choose the President. The constitution (Article 2, section 1) leaves it entirely to the state legislatures to prescribe how the Electors are chosen. However, popular election is the norm. Immediately after the constitution was adopted two states opted for election as the means for choosing electors. Five other states soon followed. By 1832, South Carolina was the only state that chose electors without an election, but since the 1872 election presidential electors have been selected everywhere in the United States by election. (The exception was Colorado, where its legislature chose electors in the 1876 election, the year it was admitted into the Union as a state.)

In accordance with the U.S. Constitution, the conduct of presidential elections is regulated by the law of the different states. Ballots may be classified broadly as those cast in-person either during early voting or on Election Day, and the mail-in and drop-off ballots. The essential difference is that in some states, the processing of mail-in ballots is centralized at the county level while in-person ballots are processed in the districts they were cast. Also, some states prohibit processing of mail-in ballots (and ballots from early voting) until Election Day. In such circumstances these ballots are typically counted after the in-person ballots. The three stages of ballot processing are: tabulation (counting votes), canvassing, and certification. Canvassing is the process by which election officials verify the ballots and ensure the tabulation is correct. If the canvassing is successful, the election result is certified by the Secretary of State. Certification is the process by which the results of the election are made official. A recount may be requested by a candidate or may be automatic where the winning margin is within a prescribed limit. There are security protocols to check voter fraud, and, in Pennsylvania, for example, ballots and paper records of vote processing machines are preserved for two years after the election. Voting machines, vote-processing machines, and equipment for transmission of results are not connected to the Internet.

Second Stage (December 14): The Electoral College
Section 7 of Title 3 of U.S. Code states that, “The electors of President and Vice President shall meet and give their votes on the first Monday after the second Wednesday in December next following their appointment at such place in each State as the legislature of such State shall direct.” This year, the day falls on December 14. The number of electors assigned to a state is the same number as the state’s seats in the Congress. By the 23rd Amendment to the Constitution, the District of Columbia is allocated three electors, which is also the minimum for any state, making a total of 538 Electoral College votes. To win the presidency, a candidate must win a majority (at least 270) of the electoral votes. The party with the highest number of votes in the presidential election in a state sweeps all the state’s electors, except in Nebraska and Maine. Unless where the election result is contested, state legislatures are expected to appoint all the electors from the list provided by the party with the most votes. In Nebraska and Maine, electors are appointed by congressional district, with the overall winner in the state receiving a bonus of two electors.

The Electoral College, though, as the eminent American constitutionalist Edward Corwin noted, is “actually a congeries of colleges,” is a truly exceptional American institution. But, as Robert Dahl observed, no part of the Constitution revealed the flaw in its design more quickly than the electoral college. The Constitutional Convention that met during the summer of 1787 created the office of President but had difficulty agreeing on the modalities for filling the office. As a last-minute compromise, the Electoral College was created (although the Constitution does not call it that or any other name). Almost soon after, in 1824, the mechanism practically broke down and was shored up by the 12th Amendment. Again, in 1876, it experienced another crisis, which was relieved by the Electoral Count Act 1877, now codified as Title 3 of U.S. Code. State legislatures have almost plenary powers with respect to appointment of electors. McPherson v. Blacker, 146 U.S. 1 (1892); Bush v. Gore, 531 U.S. 98 (2000). Title 3 section 5, so-called safe harbour, allows states up to six days before the meeting of electors to resolve with finality, through its courts or other procedures, any dispute concerning appointment of electors.

This year, the statutory deadline falls on December 8. Exercising this power, the legislature of Georgia, for example, is apparently competent, in appointing electors, to disregard the election result should the result become significantly embroiled in controversy undermining its credibility, or if the (Republican) Secretary of State declines to certify the result because the canvassing of votes discovered significant irregularities.

Another hazard is the phenomenon of so-called ‘faithless’ electors, who vote for a candidate other than the one they were committed to by their appointment or abstain from voting. Up to 2016 there have been 163 faithless electors in the history of the Electoral College. Fortunately, there has been on occasion yet where it has affected the outcome of a presidential election. However, it takes little imagination to contemplate that in 2020 with the country this polarized, there could easily be a significant number of faithless electors who could swing the Electoral College against the candidate that a majority of electoral votes were pledged for.

Third Stage (January 6): Joint meeting of Congress
While the power to appoint electors is vested by the Constitution in the state legislatures, the responsibility to count the votes of the electors lies with the Congress. By section 2 of the 20th Amendment, the Congress elected on November 3 begins its session on January 3, 2021. Title 3 U.S. Code section 15 states that, “Congress shall be in session on the sixth day of January succeeding every meeting of the electors. The Senate and the House of Representatives shall meet in the Hall of the House of Representatives at the hour of 1 o’clock in the afternoon on that day, and the President of the Senate shall be their presiding officer.” Thus, this year, Vice President Mike Pence, as the presiding officer of the Senate, shall preside at this joint meeting of Congress. That is by no means remarkable. In the past, Vice Presidents that lost the presidential election presided, Richard Nixon (1961) and Al Gore (2001). Thankfully, the role of the presiding officer is essentially ministerial, almost ceremonial.

The primary function of the meeting is to count the vote of electors according to the certificates received from the various states. However, it may also make important decision about the validity of any votes, should this arise. More significant is a contingent election, which arises where there is a deadlock in the Electoral College because no candidate obtained the majority of votes, by the 12th Amendment, the House of Representatives shall immediately choose the President from the three candidates with the highest votes, voting en bloc by states.

That is, every state will cast one vote, and a state is disqualified if its representatives are unable to agree to vote for one candidate. Thus, Wyoming with a population barely over half million has an equal vote with California with 40 million residents. To be elected President, a candidate must receive the votes of a majority (at least, twenty-six) of the states. The Vice President, on the other hand, will be selected by the Senate from the two candidates with the highest votes in the Electoral College. Senators vote individually, the quorum being two-thirds of the Senate, or sixty-seven senators. Since states have equal representation in Senate, it is roughly equivalent to en bloc voting by state in the House of Representatives (except where the two senators from a state are from two different parties). The candidate who receives the votes of a majority (fifty-one) of senators shall become the Vice President. Should the House of Representatives remain deadlocked by the presidential inauguration day (January 20), the Vice President (elected by the Senate) shall become the President in the same manner “as in the case of the death or other constitutional disability of the President.”

Conclusion
The 2020 presidential election may prove to be the greatest stress on the U.S. Electoral College system. A contingent presidential election has arisen twice (1801 and 1825) and once for Vice President only (1837). The former has not occurred since after the 12th Amendment. Should it arise in 2020, it would destroy the Electoral College machinery to its foundation. “No feature of the Constitution,” wrote Edward Corwin, “has raised more difficulties in the past, or remains at this moment a graver menace to our domestic peace.”