A non governmental organization, Rivers First Initiative, RFI  in Rivers State has dismissed the recent decamping of some persons who claimed  to be members of All Progressive Congress, APC in Khana Local Government Area of the state as a ruse adding that those who gathered at the event claiming to be members of APC were hired from various communities outside Khana for the show of shame. 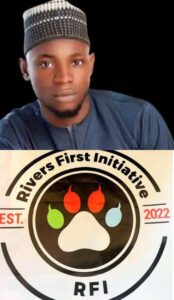 He said those crowds seen during the rally were all members of Grassroot Develooment Initiative GDI, which were the off shot of PDP that came along side with their Coordinators from different local government areas of the state claiming to be PDP members in Khana.

He said Khana is for the candidates of All Progressive Congress, APC and no any other party will have the taste of the votes from the electorates.

Comrade City who is also the National Coordinator of G37 said APC has taken over the remaining supporters of the Peoples Democratic Party, PDP in Khana who were tired of stomach infrastructure politics.

The political activist further explained that the emergence of Arc. Tonye Cole as Governorship candidate has remarkably boost the chances of the All Progressive Congress, APC  in the state.

“ The painstaking nominations of candidates of All Progressive Congress, APC in all elective positions in the state for the 2023 Polls has thrown the Peoples Democratic Party, PDP into panic mood and that has accounted to why they are organizing fake people to decamp and this gimmick can not safe them from the imminent defeat .” He stated.

He commended the senatorial candidate of APC in Rivers South East, His Excellency Ambassador Oji Ngofa, the House of Representatives candidate for Khana/Gokana Federal Constituency, Chief Honourable Eric Sorbari Nwibani KSM and the House of Assembly candidate for Khana Constituency 1, Chief Honourable Neeka Igbara Esq for their doggedness and determination to ensure victory for APC in 2023 General Elections.

In a related development The Coordinator Rivers First Initiative, in Khana State Constituency 1,
Mr. Isaiah Adooh has warned those masquerading as decamping from All Progressive Congress, APC to the Peoples Democratic Party, PDP to desist from such blatant lies adding that members of the APC from the constiruency remain intact.