Era of forceful sales of textbooks in Kogi Poly over – Dr. Salisu Usman.

The Rector of Kogi State Polytechnic Lokoja Dr Salisu Usman Ogbo has warned against the forceful sale of textbook by lecturers to Students of the institutions, disclosed that the era of sales of textbooks is over. 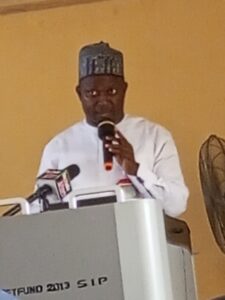 Dr Ogbo gave the warning on Wednesday while addressing a press conference in Lokoja.

While clarifying that he did not stop sales of textbooks, Dr Ogbo cleared the air that he only stopped the sale of books using offices of Lecturers, class Representatives and many more.

He pointed out that all sales of textbooks must be chanelled through the Committee set up by the Polytechnic to sell textbooks.

The Polytechnic Rector while frowning at the attitudes of some lecturers forcing Students to buy textbook as a prerequisite to pass their courses said the sales of textbooks popularly called handouts remains banned in the institution.

According to him, any Lecturer found violating this warning will be sacked.

He promised to vehemently deal with Lecturers who force students to buy textbooks, as he promised not to continue with the old order.

Ogbo revealed that some bad element in the institution have decided to rubbish the good reputation his administration has achieved so far, stressing that, the Polytechnic has zero tolerance to examination malpractice, cultism and all form of immoralities on campus.

” Forcing our students to buy text book is totally unacceptable and over. Selling of text book should not be by compulsion and as a parameter to pass any course. Any lecturer caught will be dismissed” he warned.

The Rector disclosed that since his assumption of office, he has paid earned allowances inherited from previous administration, disclosed that there is no request for payment on his table.