The Kogi NGO Network says its engagement style has been civil, consistent, using right base approach as the hall mark of its achievement in the last two years. 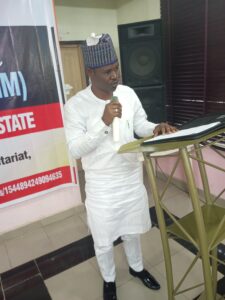 While pointing out that the obvious challenge the NGO is still trying to navigate with as a network saddled with the responsibility of creating an enabling environment for CSOs to strive in the state is funding.

Amb. Idris lamented the dwindling support and assistance from donor agencies that is shrinking, advocated the need to look inwards to ensure continuous existence of NGOs to enable them carry out there usual activities which he mentioned cannot be over emphasized.

The outgoing Chairman KONGONET said diplomatic and consistency at engaging the governance system of the state (the executive, legislature and the judiciary) has placed the network at it rightful position to participate and give people oriented recommendations and perception to governance decisions in the state.

Through collective push, consistency and collaborative efforts as civil society actors in the state, Amb. Idris explained gave birth to land mark achievements both at the legislature and executive arm of Kogi State government.

The outgoing Chairman specially recognize and appreciated members for their immense resilience and tact to ensure that success was achieved.

He also listed the presentation as private member bill, passage, assent and inauguration of Kogi State Office for Disability Affairs.

The presentation as private member bill, passage and assent to Violence Against Persons Prohibition (VAPP) Law in Kogi State.

The consistent engagement for the signing of Open Governance Partnership (OGP) by the Kogi state government.

Interestingly, within the past two years the network holistic and pro-active engagement he said has lead to some members of civil society organizations in Kogi State recommended to represent the interest of civil society in boards as indicated in the laws that brought them into being.

The outgoing Chairman acknowledged the support and partnership enjoyed thus far from the state government led by His Excellency Governor Yahaya Bello, said the current administration has technically taking cognisance and acted upon KONGONET demands on several instances, with the most recent of such as the signing up of Kogi State to OGP and VAPP law.