The contractor handling the repair of the seventy two tractors belonging to the twenty five local government council’s in Niger state, in an interview disclosed that the tractors are intact but not seventy two as claimed by the government official. 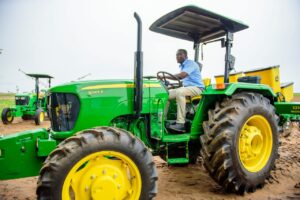 The contractor Engr Jafar Usman Alkali disagreed with the insinuations that he misapropriated seventy two tractor’s as claimed,he said that the exact number of tractor’s in his possession are sixty nine that he moved from the twenty five local government council’s to minna for repair and are there waiting for government to release fund to effect their repairs.

When i asked him why he refused to disclosed to the state Assembly ad_hoc Committee where the tractor’s are situated, Engr Jafar Usman Alkali stated he as the contractor handling the refurbishement of the tractor’s did not enter any aggreement with the state house of Assembly” so I have no problem with them”.

According to him those that gave him the work to refurbished know where the disputed tractor’s are, he lament “I can’t just walk into local government council’s to move their properties without written documents and they will allowed me to go unchallenged”, the deed have been seal better for them to release fund as agreed, than waisting their time.

He stated that the reason behind the relocation of the tractor’s is unconnected to the fact that government is planning to re award the contract to another firm and rendered his labour fruitless.

Engr Jafar usman Alkali said he is ready to repair the tractor’s in batch, at least three tractor’s in a month with his money if assured of getting back his money on collection of the repaired tractor’s .

He stated that he have so far expended over one hundred and fifty million naira on watchmen,according to him ,he pays twenty thousand naira per tractor in a month, multiply by twelve months, multiply by sixty nine numbers of the Tractors in his possession, multiply by seven years equal to the amount goverment is owing him for provision of security for the Tractors or should allow to go ahead with the contract.

Engr Jafar mentioned that out the sixty nine tractor’s he has repaired three tractor’s,the then Chairman of Muyan local government moved three tractor’s to unknown location,he explained and that seven are there at the trade fair complex were they where initially parked for repair.