Let our Campaign be issues based, don’t Insult Anybody, Karimi urges supporters

Former House of Representatives member representing the good people of Yagba Federal Constituency and APC Flagbearer for Kogi West Senatorial district Sunday Karimi has called on his teeming supporters across the Seven (7) local government area that covered Kogi West Senatorial district not to insult or deride anybody on his behalf but must stay focused to deliver all APC Candidates 2023. 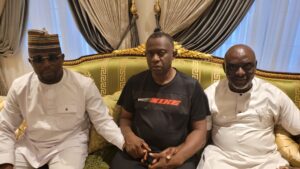 Sunday Karimi gave the advice in Abuja while addressing some support groups that came to visit and identified with him.

According to him, whoever engages in any forms of insult, rudeness is not working for him and the party.

He described others Candidates from PDP, NNPP and ADC as all brothers and partners in the tasks of liberating Kogi West Senatorial district and put it on the path of greatness.

“I must advice all my supporters in APC and Karimi Support group movement and other well-wishers not to insult or be rude to any other Candidates or party leader on my behalf, adding that party interest should be put above self interest.

“We must not engage in any kind of acts that will tarnish the image of any leader or promote disharmony and bitterness within the ranks of the party. Whoever does that he or she is not working for me.” Karimi said.

The former House of Representatives member caution his support groups to be wary of some individual who uses religion and ethnic .differences to cause political harmony and division in the State and Senatorial district

“Do not fall to their antics no matter the level of provocation, you must be able to expose those planning to do so before the act,’’ he said.

Also speaking at the visit and the leader of the delegation, Hon Bode Adeyemi, Hon. Monday Seresere and others political leaders from Kabba Bunu local government area of Kogi State said they identified with Karimi ideology of especially in the areas of education, youth empowerment and infrastructure development. He urged members of the group to work very hard for the actualisation of Karimi Senatorial ambition so as to bring about fast development and unity in the State and Senatorial district. He eschew campaign of division in the party.