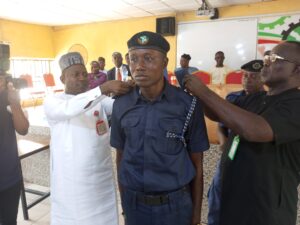 The Rector, Kogi State Polytechnic, Salisu Usman Ogbo, has assured the staff of the institution that hardwork, loyalty and commitment to duty would always be rewarded. 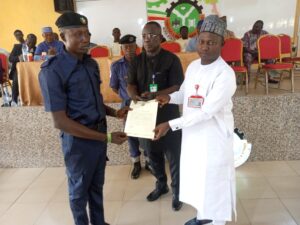 The Rector made the disclosure while presenting a certificate to Mr. Aribedo, who was granted accelerated promotion to Principal Security Officer from Senior Security Officer, assured that under his leadership, excellence and commitment to duty would always be rewarded.

He described Mr. Aribedo as a dutiful and loyal officer who have shown gallantry and dedication to duty as a security officer, said his elevation was a council decision, praised him for ensuring improved security in the institution.

The Rector said he would never travel the path of religion and ethnicity in rewarding commitment, described the elevation of Mr. Aribedo as reward for productivity assured staff of reward for hardwork.

Highlights of the ceremony was the decoration of Mr. Aribedo with his new rank as well as the presentation of certificate to him by the Rector.