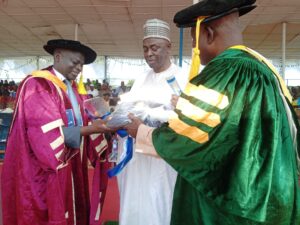 Receiving the Fellowship Award, Amb. Ocheni described the recognition conferred on her at the combined convocation as well cherished.

While expressing appreciation that the Fellowship Award is an indication that the Management of the Institution has been following very meticulously her contributions to the advancement of the society, said it would spur her to do more.

In her remarks, she said ” I am indeed now challenged more than ever through this recognition to double my efforts towards delivery of quality services to my Country and humanity in general. I will at all times be guided by this popular saying, “To whom much is given, much is expected in return”.

Amb. Regina pledged to at times to sustain her support and collaboration to all the programs designed towards the improvement of infrastructure and academic growth of the Federal Polytechnic Idah.

Ambassador (Mrs) Regina Ikani Ocheni, PhD, Nigerian’s Deputy Head of Mission to the Republic of Germany, was represented at the combined convocation by her husband, Prof. Stephen Ikani Ocheni, former Minister of Labour and Employment, thanked the Federal Polytechnic Idah for finding her worthy of the honour.

While pointing out that as a proud alumni of the Polytechnic, she will remain passionate about the growth and development of her alma marta, expressed delight that the Institution has continued to contribute significantly to the technological breakthrough of the Country.

She lauded the Federal Polytechnic Idah for establishing itself over the years as a centre of academic excellence, with numerous products of the Institution making waves in both the public and private sectors of our economy.

She maintained that she is gladdened about the tremendous exploit of some of Alumni of the Federal Polytechnic Idah in the telecommunication industry, financial sector and also in administration, urged them to strive to maintain the monumental attainment as well as other achievements.