The Dangote Cement Plc, Obajana Plant, and mining communities have sealed a renewed development pact that has been described as landmark, even as the company scales up its intervention schemes. 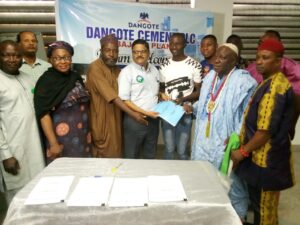 The Plant Director, Dangote Cement Plc Obajana, Mr. JV Gungune presenting a copy of the Comunity Development Agreement to the Elosho of Iwaa land HRH Oba Francis Migbole at the signing ceremony of the CDA Thursday at Obajana Kogi State.

The new agreement signed at the factory in Obajana Thursday was described by both Dangote Cement Plc and the communities as a milestone.

Representatives of the mining communities of Oyo and Iwaa said the Community Development Agreement (CDA) jointly assented will see more job opportunities for locals, and bring about rapid social and economic transformation of their communities.

Speaking at the signing ceremony, the Minister of Mines and Steel Development Arch. Olamilekan Adegbite said the federal government was glad that the Dangote Cement Plc was fulfilling its obligations to the host communities, adding that the CDA is in line with the 2007 Mineral and Mining Act.

The Minister who was represented by the Ministry’s Chief Geologist Ntuimbe Etta said the government will continue to facilitate a peaceful atmosphere between the company and its host communities.

Plant Director, Dangote Cement Plc Obajana, Mr. JV Gungune, said the massive support for the communities envisaged in the new CDA is in alignment with the company’s vision and mission of supporting its host communities.

He said the five-year agreement would be implemented between 2022 and 2026, adding that the Group President Alhaji Aliko Dangote is appreciative and proud of the support from all the communities, including the plant communities of Obajana and Apata.

According to Mr. Gungune, the content of the CDA will be implemented under the supervision of the mutually agreed Community Development Monitoring Committee.

Senior General Manager and Head of Environment and Community Affair, Dangote Cement Plc, Engr. Tukur Lawal said the company is a socially responsible one and will continue to touch lives through the provision of basic infrastructures.

He described the two mining communities as peaceful, supportive, and business-friendly, adding that the presence of the company has brought about urbanization and development.

Only recently, he said, the company completed the country’s longest concrete road between Obajana and Kabba.

The obviously elated Elesho of Iwaa, HRH Oba Francis O. Migbole, described the President of the Dangote Group Alhaji Aliko Dangote, as God sent, adding that the joy of the his community knows no bound.

He recalled that last year the company had completed a multi-millionaire health facility for Iwaa mining community.

Similarly, the Baloo of Oyo HRH Oba Solomon Obahawu, described the company as a blessing to his people and the generations yet unborn. The traditional leader said his community would do everything possible to continue to support the company so that it can enjoy a smooth operational turf.

The Baloo who was represented by Mr. David Oloruntoba said the Dangote Cement Plc has rescued them from poverty.

Some of the areas of support itemized in the five-year Community Development Agreement include: Road infrastructure, education and scholarship, health, micro-credit and enterprise development, employment, vocational training, award of contracts, and the provision of startup capital to businesswomen, among others.

It would be recalled that the Dangote Cement Plc annual tax remittances to the government hovers above N100 billion.

In her goodwill message, Director, Mineral and Ecological Services, Kogi State, Atinuke Onimode commended the Dangote Cement for rescuing the company from poverty.