Bassa people living in diaspora have been called upon to sustain peaceful collaboration with the host Community across the country. 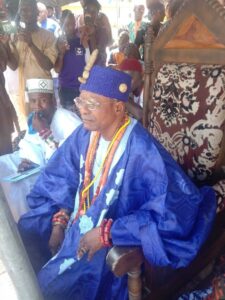 The Aguma of Bassa represented by a prominent Son of his domain Ernest Zhokwo said peaceful coexistence of the people attract enabling environment for development.

According to his Royal Majesty the Aguma of Bassa the Bassa people is having codial relationship with Yoruba people over the years noting that he is not surprise for the honor done to one of his subjects in Odo Ape Community of the Area.

Earlier the OBA ARO Odo Ape Oba Jimoh Meseko described the New Oba Bassa Community Odo-Ape Bunu Chief Uji Ibrahim Matthew as a trusted team leader of his people noting his capacity in the scheme of things in his domain has earned him his recognition.

The royal Father congratulated the new Aguma and called on the people of his domains peaceful with One another to move the community forward.

In his response Aguma OF ADO APE CHIEF UJI Ibrahim Matthew expressed gratitude to God for the coronation as Aguma Bassa Community Odo-Ape Bunu and Prayed God to Grant Oba long life on the throne of his fore father’s.

The traditional ruler maintained that he will consult wide noting that the women,youth remain pivotal to development of the society.