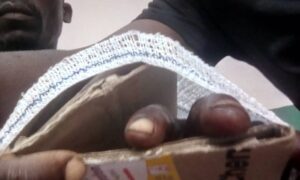 The couple had on the 9th of July, 2022 reported a case of attempted murder and rape to the Okhuaihe Police Division in Uhunmwonde which subsequently led to the arrest of the accused, one Mr. Osayande. But the couple are claiming lack of deligent investigation of the matter and are appealing to the Edo State First Lady and the Commissioner of Police to come to their aid as the rapist has been left off the hook and is going about freely in their community.

In their petitions addressed to the Wife of the Executive Governor of Edo State, Mrs. Betsy Obaseki and Edo State Commissioner of Police, Benin City titled: “A Case of Loss of Confidence, Improper Handling And Investigation of a Serious Case of Attempted Murder, Rape And Violence Against Person by Okhuaihe Police Division, Uhunmwonde Local Government Area of Edo State“, through their lawyer, O. Osazuwa Esq. for S. O. Osazuwa & Co.; the petitioners alleged that Mr. Osayande surname unknown, emerged from the bush and attacked them without any reason whatsoever and raped the wife in the process.

Part of the petition reads, “We have been briefed and our services retained by MR. CHRISTOPHER IGIEBOR AND MAGDALENE IGIEBOR Both of Ilobi Village, Uhunmwonde Local Government Area, Edo State (hereinafter referred to as our client) and pursuant to his firm instruction, we write this petition on the above subject matter as follows:

“That on the 9th day of July, 2022 our client and his wife went to their farm. As they were carrying out their usual farming activities, one MR. OSAYANDE surname unknown came out from the bush and attacked them without any reason whatsoever.

“That the said MR. OSAYANDE inflicted serious machete cut on our client’s left hand and this almost resulted to loss of his hand. In furtherance of MR. OSAYANDE evil acts, he raped our client’s wife in his presence.

“That our client was rushed to Noma Hospital, Ikpoba Hill, Benin City, for urgent medical attention and he was later transferred to Owen Clinic for further medical treatment and he is still in the hospital till date.

“That MR. OSAYANDE’s conduct is no doubt is the most stupendous and startling display of rascality in the annals of human depravity. His idea of life is simply the advantage of the stronger; just or right means nothing but what is to the interest of the stronger.

“That it is however sad, the said MR. OSAYANDE who was arrested by Okhuaihe Police Division till date the case have become comatose. The Police are not handling the case with seriousness and our client has lost confidence at the Police Division.

“That much we do have control over the affairs of the Police, we know and strongly believe in your firm and resolute belief in the rule of law and justice for all and sundry whether for those at the top of the echelon of power or for those at the lower strata in the society.”

The petition called on Mrs. Betsy Obaseki, wife of Edo State Governor and Commissioner of Police, Edo State to cause the transfer of the case to the State Police Command Headquarters for proper investigation with a view to bringing the culprit face the wrath of the law.

“That in the light of the above, we urge you to use your good offices to cause a transfer of this case from Okhuaihe Police Division to Edo State Police Command Headquarters, for serious, thorough and proper handling and investigation of this case so that those involved can be made to face the consequences of their actions in fulfilment of your constitutional duty on protecting life, property and crime prevention.”