Home News The Arrest Of The Suspects Behind The Kidnapping Of Austin Idemudia: Ayen...

Exactly August 10th, 2022, at Uteh Community in Edo state, there was a report of a case of kidnapping of one Mr. Austin Idemudia, by a group of gun men. 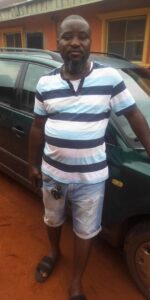 His car was said to have been sporadically shot at. While the men of Vigilante were said did a very great and commendable efforts to apprehend two of the kidnappers, whom the wife of the victim could identified; she also said that, they were six in number. After core interrogations by the Vigilante, the suspects were said to identify their selves as : Lucky Amadasun, and Francis Osamwinda.

They were said to have confessed to commit the crimes. They also, confessed the identity of their leader as Esosa, who they claimed made away with Mr. Austin Idemudia. They also made some revelations that: they were thugs of Honourable. Matthew Ikhide, who is using them as assassin’s. They narrated their involvement in the killing of one Terry Osarenkhoe few months ago in Benin.

The leader of the gallant, potent, and formidable Vigilante group, who apprehended the suspects is Mr Robinson Awele. Information reliably garnered revealed that Mr Robinson has thereafter being receiving different call threats to his life and that of his family members by Honourable. Matthew Ikhide, and his cohorts, should he made an attempts to trying to follow up the case as witness to the occurrence of the attack.

Mr Robinson on his part said the Vigilante group did not took law into their hands to pass judgement on the accused persons but handed them over unto the men of the Nigeria Police, Aduwawa Police Station in Benin. From where they were transferred to State CID Office, Anti-Kidnapping Units for further investigation. One anonymous source claimed both of them will be convey to Abuja by next week.

One community correspondents alleged that the circumstances leading to the kidnapping of Mr. Austin Idemudia was based on a long time ongoing tussle over encroachment of over 80 hectares of land in Uhegie community by Matthew Ehide; which he claimed he bought from Ayen community. This transaction was faulted on the ground that, he Matthew Ikhide had no legal justification of possession right. His claim was disapproved by both communities but ever since then, from last year, he had being victimizing the people of Ayen community by conceivable and inconceivable antics to forcefully imposed himself as the owner. The land was said to have been illegally sold by one Mr. Oduagbon Ediea.

Furthermore, it was also alleged that Matthew IKhide, is doing every thing possible to ensure that, the suspects are granted bail. One senior political office holder in Edo state identified as Honourable. Okuarobo was pinpointed as his sponsors behind the scene.

Up till the time of issuing this press release, Mr. Austin Idemudia’s has not being found. More so, the other four kidnappers who had being at large, are yet to be arrested.

The fear of the Ayen community is that whether Esosa and his other gang members had being instructed by Matthew Ehide to murder Mr. Austin, who they described as easy going, peace loving, and youth ambassador. They are calling on Federal and the Edo state government to fast track his rescues from the garrison of the kidnappers.