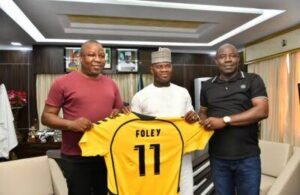 It was gathered that Kogi United on Thursday suffered a shocking 1:0 home defeat against NAF rocket in the week 20 of the Nigeria National League game held on Thursday at the Confluence Stadium Lokoja.

Expressing their displeasure over the poor performance of Kogi United, some fans who reacted to the outcome of the game which now saw the home team sitting in the relegation zone said the Abdulmalik Isah led Kogi United has brought nothing but failure to the team in the last two year.

The fans while reacting bitterly to the present state of Kogi united recall that, in 2021 under the same Abdulmalik Isah led management, Kogi United were relegated to lower division league but they later bought slot with over N10million naira to play the current season of NNL.

They, however, appealed to Governor Bello, to as a matter of urgency disband, sack the entire management team led by Abdulmalik Isah, and channel the money to other sports that have been winning laurels for Kogi State.

Expressing his reservations about the performance of Kogi United in a what app platform ‘Kogi Sports Progressive’ Timothy Emmanuel a Kogi United fan since 1995 wrote”
This is one of the most un-serious football club I have ever seen. The so called management of this football club are Clueless and daft in football management”.

Another football enthusiast Gbenga Adeleye said” Slot buying Kogi United arrested by NAF Rocket
Nonsense, una no like truth that why the team will remain where it is
[ Big shame, pampering fail.

“Generally in Kogi we are too tribal sentiment, that is why we are not progressing in some quarters. We will continue to remain were we are if we don’t think deep and channel a way to progress”.

A coach who never wanted his name to be mentioned also said” How long will the state continue to buy slot? Give the money to other sports that are serious”.

Some of the players who spoke to our correspondent under the condition of anonymity said this is worst management in the history of Kogi United.

” Can you imagine that our welfare is not being taken care of by this management. We have been suffering and smiling. Since the last management handed over to Abdulmalik Isah led team, we have not been given new Jerseys. We have been doing wash and ware.

” Recently, players contributed money to buy training kits for themselves because the one they all have is no longer good to wear. Observe our Coach Foley, him too only have one jersey. If this man (Andulmalik Isah) knows that he has nothing to offer in Kogi United, he should just leave honourably rather than kill the club completely.

“For us, we are fed up. Is it possible for you to give your best to a club when you are collecting peanut and feeding from hands to mouth. Kogi United players are not the only once complaining. The poor treatment we are getting here is the same thing applicable to our sister club Confluence Queen. What a shame” They lamented.

Reacting to calls for the disbandment and sack of the entire management team, the media officer of Kogi United football club Godwin Wambebe said the present management has tried their best to see that the team qualify for top football in Nigeria.

“A lot have been said about the fate of our dear Football Club Kogi United FC today most especially after today’s disappointing loss to already relegated NAF FC of Abuja at the Confluence Stadium. Some Passionate individuals here and in other platforms have put across words of encouragement to lift the spirit of the team while some have outrightly poured tantrums and insults on both management and players of the team which is absolutely uncalled for.

“Some even went as far as saying Government should divert the fund being expended on Kogi United to other sports so that these sports can thrive and bring laurels to the state. It’s unfortunate that this last school of thought seems to be off grid with modern realities in the business of sports despite their long years in the business because truth is,there has never been anytime that football as a game has blocked or impede the progress of other sports in Kogi State or prevented other sports from going to National Sports festivals and other championships.

“As the Media Officer of Kogi United,I’ve tried not join issues with many critics whom ordinarily shouldn’t be seen or heard insulting the management of Kogi United for the loss today and other issues because they know and understand the plight of this team but I think it’s appropriate to say that whether we like it or not the management of this club has tried its best in making sure the team doesn’t go down.

“It’s unfortunate that we are where we are today but that doesn’t mean that few out there who don’t know what the club is passing through should continually call for the sack of the management or the disbandment of the team”he stated.

Not satisfied with the reaction of his media officer, the embattled Chairman of Kogi United Abdulmalik Isah, however, wrote on the same what app group ‘Kogi Sports Progressive’ “As a leader you are bound to hear so many insult and you have to bear it hence my Boss knows my worth and the challenges we are facing. Then all this talk is baseless. Please let us come together as a brother to find way forward to our darling team and stop all this baseless noise”.

With two matches to the end of the current 2021-2022 NNL season, Kogi united will play their next game away from home against Malumfashi FC of Katsina State.