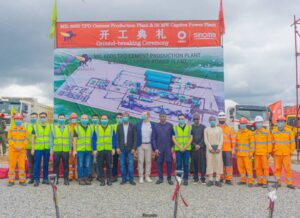 Mangal Industries had signed a US$600m deal agreement with Sinoma International Engneeering of China for the construction of a 3 million metric tonne per annum cement plant and 50MW captive power plant in Kogi State. 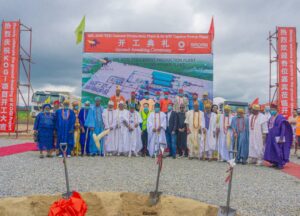 The Managing Director of the Cement Company, Engr. Fahad Mangal while speaking to *Democracy Newsline* shortly after the ceremony, said the project is expected to be completed by the end of the first quarter of 2024. 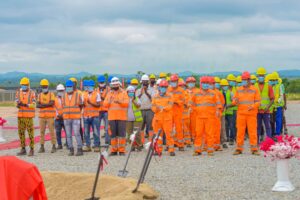 According to Engr. Mangal, the work has already commenced with the site levelling and foundation workout, saying when completed, Mangal Cement will bridge the gap of housing deficit as well as cement production in the country.

He further stated that the Company will also add value to the nation’s economy by creating thousands of jobs for the immediate communities and youths in the country as well as Revenue generation for both the State and Federal Government.

He added that the vision of Mangal Cement is to become the major player in the production of cement in Nigeria, urging the Chinese Constructing Firm to deliver the project according to specification and on Schedule.

Engr. Mangal stated that part of the vision of the company is to provide quality in Cement Production in West Africa and commended the Ijumu and Mopa Communities and Kogi State government for their respective support and cooperation.

The General Manager of Sinoma, the Chinese Cement Plant Construction Firm, Mr.Zhang Sicai reiterated the commitment of the Firm in delivering quality job as and on schedule using the best technology available now.

The Chairman of Ijumu Local Government Area, Alh. Taofiq Isa and his Mopa-Amuro counterpart, Hon. Moses Sunday lauded the decision to site the project in Okun land, saying the two LGAs are ready to work together to ensure the overall success of the Plant.

The duo expressed optimism that the Cement Company will usher good tidings to Okun land, Kogi State and Nigeria in general and urged the company to see the LGAs as partners in progress.

The Olujumu of Ijumu, Oba Williams Ayeni, said “this ceremony is a dream come-through for us and God has finally answered our prayers for a gigantic company like this that will help reduce unemployment among our teaming youths.”

Oba Ayeni also maintained that “I also want you to know that Ijumu and Mopamuro people are one and we are committed to working together for the overall success of this laudable project.”

“I want to restate categorically that we are not selling our land as what we simply did was leasing it. We had an agreement with the company and we will do our best to keep to the Memorandum of understanding. We know that as the company will continue to grow, they might need more land and as I said earlier, we willing to provide more land as a show of our modest commitment to the success of this project.”