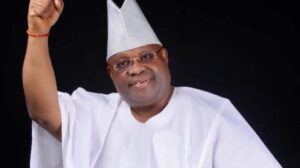 “We wholeheartedly congratulates Nigerians and the PDP family home and abroad over the unprecedented landmark victory in Osun state.

It is a victory worth savoring, which did not only kicked out the APC led epileptic government in Osun but shows the rejection of the APC led Federal Government’s misrule in Nigeria.

This victory confirms people’s rejection of the none inclusive political system as enshrined by the APC and as summarized by the PDP‘s Presidential Candidate, Alhaji Atiku Abubakar; as NONE INCLUSIVE. Where he noted that this unpatriotic act in the 21st century was brought to bear by lack of respect by the APC for rule of law, Nigeria‘s unity and progress as the APC went on that parochial Muslim-Muslim Presidential ticket path, ochestrated by none other than the self-styled Bola Ahmed Tinubu, the Presidential candidate of the APC.” as contained in the opening paragraph of the message signed by the Director Media and Communications for the PDP in Kogi state, Comrade Dayo Onibiyo.

The party says, it shows that Nigerians have indeed rejected the APC and it’s penchants for uncontrolled abitirary increment of costs and prices of items, in all facets of life, from home use items to consumables, noting that even this week, Kerosine is being sold for N800 as against the N45 in 2014 that they, APC met it. It went ahead to state, that the PDP appreciates the people’s resolved- doggedness that resisted ten thousand naira (N10,000) plus a bag of 5 kg of semovita bag per voter offered by the APC and it’s bullion van Lord’s presence: for them to sell their rights in Osun.

The Press Release, re-emphasised that, this tells us (Nigerians) and the international community, that Osun is a great curve in the history of re-building and repositioning Nigeria.

We say, God bless Osun people who defiled religion to vote massively for the PDP as a symbol of recovering Nigeria come 2023.

If APC can loose in Osun, the home of Bola Ahmed Tinubu (BAT), APC National Leader, who also doubles as it’s Presidential candidate as well as the National Secretary of their party the APC, Mr. Omisore, what else do Nigerians need to know that, APC has expired like the APC drug itself.

We therefore, Congratulates Hon. Distinguish Senator Isiaka Adeleke now GOVERNOR-elect for Osun state, as we celebrate with our great members in Osun from the one time Governor, Rtd but not tired H.E Oyinlola Olagunsoye, Hon. D.O Babayemi and other top party officials and members who all closed ranks to boot out the APC and bad governance.

For us, we are coming, keep voting the PDP, the AtikuOKOWA ticket by God’s grace, Insha Allah is a possibility. We say God bless Nigerians.