A Non-Governmental organization Kogi East Neighborhood Watch(KENW) felicitated with the Kogi State Commissioner of Police CP Edward Egbuka on the auspicious occasion of his birthday. 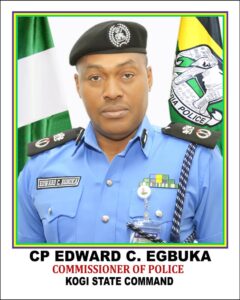 In a statement jointly signed by the association Chairman Dr Omakoji Oyiguh and Secretary Mr Isaac Inah on Friday also commended the effort of the CP and his leadership in supporting the Government to ensure that Kogi State remains relatively secure despite the deteriorating insecurity all around.

The statement reads further” CP Edward Egbuka has supported the development of community policing in the State, particularly Kogi East where the community initiative was birthed to deal with criminality under the watch of the Police.

” CP Edward Egbuka has given communities under his jurisdiction confidence of the presence and synergy of the Police to deescalate criminality.

“KENW wishes the CP remains more active with more grace, good health, and wisdom to continue to know what to do and the steps to take to keep Kogi State secure”.