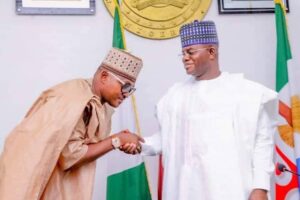 The IPF and IADA made the commendations in a separate statement made available to journalists in Lokoja on Monday.

A statement by the IPF’s National Coordinator, Mr Peter Zakari, said the development came as a result of the governor’s love and kind heartedness towards the people of Dekina Local Government Area.

“We thanked Governor Yahaya Bello for the appointment of our young and talented medical Doctor, who had passed through many medical trainings with lots of experiences recorded by him over the years.

”It would also ensure the Inclusion of our own into the cabinet level and for the timely and effective management of our health workforce and facilities across the state.

”We believe in the capacity of Dr. Zakari Usman and his ability to take Kogi State‘s health management systems into the world class levels for optimal performance”, he said.

The IPF National Coordinator stressed that the former Chief Medical Director of the Kogi Hospital Management Board, would do more as Health Commissioner for the state and the people by the grace of God.

Also, a statement jointly signed by IADA National President, Mr. Gowon Abimaje; and its Chairman, Lokoja chapter, Mr. Jacob Idajili, thanked the governor for his rare wit, love and kindness at picking their own, Dr. Zakari Usman as commissioner for health.

IADA described the appointment of their son as the Honourable Commissioner for health as a great asset to Kogi State and Nigeria in general.

They noted that Dr Zakari’s stint as the CMD of Kogi Hospital Management Board (HMB), is well experienced and groomed to breath fresh air into the health sector for meaningful and effective service delivery to the people of the state.

They expressed hope that the newly sworn-in health commissioner would bring his experience to bear in leaps and bound for the various growth and development of the health institutions in the state.

They stressed that the invaluable experience that Zakari had garnered as the CMD of Kogi Hospital Management Board would be of immense contributions to the state‘s health sector.