Sam Omatseye, the Delta state-born chairman of the Nation Newspaper, ignited a firestorm with his graceless piece, Obi-tuary, in the August 1, 2022 edition of the paper. There has been an avalanche of cringing over the article steeped in half-truths and absolute falsehoods. 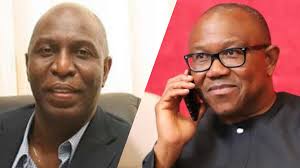 It is an article that is filled with bile as it is vile; tasteless, gangster-like, and morbid. Reading the1,329 worded write-up is like wading through a field of putrid. It ranks foul as it is revolting.

The piece, as in Omatseye’s style, is couched in elegant language and like evil could serenade you from looking into his “barren darkness of heart” as was Christopher Marlow in Josef Conrad’s gross epic, The Heart of Darkness.

As it is wont to happen with literary merchants, Omatseye like Marlow, instead of to focus on issues as it pertains to the 2023 elections, decides to not only malign and misinform, but tell a comforting lie, rather than reveal the truth about his descent into madness; the lure of living in lucre gleaned from the mines of the Lord of Bourdillion.

At a time of so much divisions and ethnic tensions, one would imagine that a man that has seen several seasons of anomie like Omatseye would show presence of mind and be drawn away from the ethnic card to so wantonly excite such anxieties about tribe and region is macabre and amoral.

His idea that South East Nigeria and Igbo in particular are one-dimensional in their political agitation is primitive and dangerous.
What Sam Omatseye fails to grasp is that the same could be said of his paymaster, Asiwaju Bola Ahmed Tinubu and the Yoruba agitation heralded by the Cotonou held Sunday Igboho. History shows that his puppeteer had gone on record to voice his disdain for Nigeria’s unity. (See ThisDay, the Sunday Newspaper, April 13, 1997.)

The presidential candidate of the Labour Party, Mr. Peter Obi, is not known to have been affiliated with the IPOB agitation for a separate country from Nigeria. Rather than admit that much, a man who is widely admitted amongst his journalism fraternity as “writer for hire” takes the very low road of suggesting dalliances of Mr. Obi. If the coin were to be tossed in that matter, he and his lineage challenged master would fail the test of scrutiny.

For Mr. Omatseye to not stay on the floundering campaign of the APC presidential candidate and the other “major” candidate demonstrates that the grandiose ambition of Emi lo kan is headed for the rocks and what is left is to dash the rising of the Eastern Sun in Nigeria’s political firmament. History bears witness that as a merchant of words to sustain his crave for the good life, Omatseye has aided the ruin of this country and Lagos in particular.

For a man that has lived in Lagos that long, what his bother should be is why has it remained an unliveable city. (https://www.thenewhumanitarian.org/news/2006/09/05/lagos-mega-city-slums).

Why has its infrastructure not matched the touted humungous revenue generation since and after the heathen god of Lagos was in and out of office. Is it because it is funnelled to a life of hedonism, materialism and graft?

Why has his master’s name always been synonymous with corruption and nothing enduring? Asking of Obi’s legacy is failing to see the yearly feats of Anambra citizens in national exams. It is failing to realise that a good name is better than stolen silver and gold.

But when a man drunk on the Hemlock of Bourdillion seeks to create a momentum on nothing, he barely sees beyond his nose.