The All Progressives Congress in Ijumu local government area have been asked to join hands in building a greater Kogi West Senatorial District. 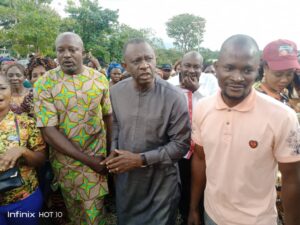 The APC Executives and Stakeholders were equally asked to ensure massive victory for APC in the forthcoming February Senatorial election, pointing out that the time for all hands to be on deck remains now.

Hon. Sunday Karimi made the call to the Members of the Ijumu APC Executives today, assured that quality representation in the next dispensation for him would be business unusual.

Hon. Karimi was given a rousing reception by the APC Executives, described him as a man with the capacity to offer quality representation.

Hon. Sunday Karimi is the APC Senatorial District Candidate was at the Party secretariat on a familiarization visit to interact with members and stakeholders of the party, used the opportunity to beg for support, disclosing that his aspiration is borne out of the need to offer quality representation.

While pointing out that his relationship with members of the APC in Ijumu local government area dates back history, assured that he would justify the confidence that would be reposed on him if elected.

While assuring that he is ready to offer purposeful representation, says he has a wholistic blueprint that would harness the full potentials of the area appealed for members to put behind the past towards a greater future.

Hon. Karimi thanked the APC Executives for the reception and assurances of a massive votes, said there efforts would not go unrewarded in human and capital development.

The various speakers who pledged there readiness to work for the APC victory, described Hon. Karimi as the best that would happen to Kogi West Senatorial District, used the medium to call on all the members to at the commencement of campaign begin House to House and massive sensitization towards ensuring total victory for APC in all election.