The need for Infrastructure planning and risk-management techniques to lessen the effects of flooding has been advocated by the Executive Director, Challenged Parenthood Initiative, Ms Eunice Abimbola Agbogun. 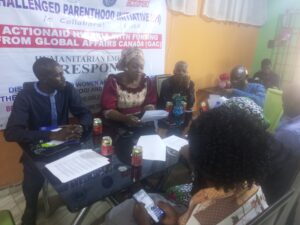 Ms. Eunice made the advocacy at a press conference and wake up call to stakeholders on contingency plans on the 2022 flood in Kogi State on Monday 5th December, 2022. Lokoja, Kogi State, said creating action plans, empowering resource mobilization, developing risk-management methods, and defining stakeholders responsibilities should be the watchwords. 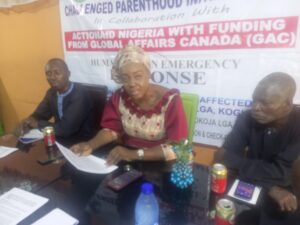 While pointing out that the need for aggressive sensitisation needs that should be implemented before and not after a flood has become very necessary. 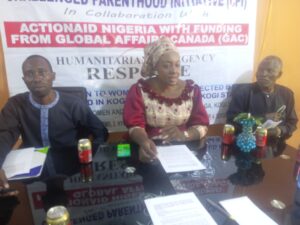 As part of the recommendations, Ms Eunice urged for the establishment and setting up of a task force to enforce compliance prior to, during, and after a flood. 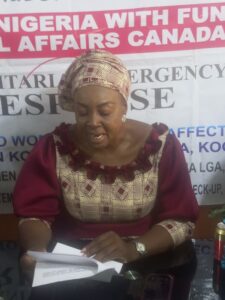 Mutually acquired land she opined should be allocated to victims of flooding at highlands, called for the establishment of a revolving Loan (Soft) Funds to be accessed by victims who satisfy the conditions of constructing a new abode in flood free area.

Similarly, she called for the provision of early maturing seedlings to farmers cultivating along the river bed to minimize losses due to the effect of flood.

She added that the erosion /flood on Lokoja – Abuja highway should be given holistic but professional study to avert its devastating effects on our roads.

Ms Eunice concluded by saying flooding in Nigeria occurs annually, yet the adverse effects she pointed out can be mitigated through proper management.

Studies she added can help improve the management of the risks associated with flooding which she noted remains extremely valuable.

While maintaining that there remains much work to be done, particularly the development of appropriate action plans, empowering resource mobilization, risk management strategies and defining responsibilities of stakeholders, expressed worries with heavy losses associated with the perennial flooding.

In 2012, Ms Eunice noted that Nigeria experienced its worst floods in more than 50 years, due to heavy rainfall across the country and the release of water from Lagdo Dam in northern Cameroon east of Nigeria, used for electricity generation, and irrigation, releasing its excess water, lamented that the outbreak affected 32 states, 24 of which were severe.

The floods she disclosed occurred from July to October that year, affecting more than 7 million people with more than 2 million others counted as internally displaced persons (IDPs).

More than 5,000 people in 2012 Ms Eunice explained were physically injured with over 5,900 houses destroyed, said the flood affected 441,251 people and recorded over 100 deaths.

Making a run down of the number of flood occurrences across Nigeria within the last decade, according to the Executive Director CPI, summarises that the North-West zone had the highest frequency of flooding, with 31 instances, followed by the North-Central and North-East zones with 20 and 19 instances, respectively. The South-East zone she explained had the fewest floods, similar to the South-South and South-West zones.

Before 2022, Ms Eunice said the year 2012 had the highest number of flood occurrences in the country, with 18 incidences, closely followed by years 2015 and 2017 with 17 incidences each, the next she disclosed are 2018 and 2019 with 12 incidences each. The years with the fewest flood incidences according to Ms Eunice are 2014 and 2016, each with 1 incidence in the South-West and North-West regions, respectively.

The 2022 flood disaster that affected Kogi state Ms Eunice stressed marks precisely ten years after massive flooding submerged several communities across nine Local Government Areas in the State in 2012, with prediction by the Nigerian Meteorological Agency (NiMet) that the floods will affect several states in Nigeria, said Kogi state was one of the states forecasted to experience floods in 2022.

Apart from Lokoja the Kogi state capital that was badly affected by the flood disaster, other local government areas affected according to investigation Ms Eunice added include; Kogi, Ibaji, Idah, Ajaokuta, Omala, Bassa, Igalamela LGAs, revealed that Kogi, Ibaji, Lokoja, Bassa were the worst heat by the disaster.

Ms Eunice disclosed further that In Ibaji Local Government Area, an estimated 50,000 more persons as at the time of assessment were displaced, said reports from Ibaji, Idah, Igamela/Odolu, Omala, Ofu, Idah, Ajaokuta and Kogi KotonKarfe areas also showed more terrible devastation as many communities went under water and the farmers especially rice and yam farmers in those areas groaned in pains as their farmlands and the farm produces were destroyed by the rampaging floods of fury across their communities.

At the Ganaja area, Ms Eunice disclosed that the highways connecting Lokoja to 9 local government areas in the eastern part of Kogi state and several other parts of eastern Nigeria were completely submerged, thus making the road impassable.

The Executive Director appreciated the Federal and State governments, as well as their agencies, for providing early warning of the impending flood. In order to ensure compliance at flood high-risk regions, she said the establishment of three IDP camps in the state capital by the state government through SEMA remains commendable.

The Executive Director equally thanked the numerous illustrious civil society organisations, including Challenged Parenthood Initiative (CPI), Kongonet, Lift Up Care Foundation, RECEF Nigeria, Give Direct, Red Cross, and many others that successfully demonstrated their sensitivity to the needs of the underprivileged during the 2022 flood catastrophe. She said with the help of the numerous donors, they have been able to lessen the unimaginable sufferings of the flood victims in Kogi State.

Ms. Eunice particularly give special thanks to ActionAid Nigeria, the sponsor of CPI’s intervention, which includes providing relief supplies to women and girls affected by the flood of 2022 and sponsoring stakeholder discussions on setting up and monitoring an emergency preparedness system, as well as on roles and responsibilities of stakeholders, said the need to start making plans for prevention rather than for relief after the 2022 flood has become necessary.

She however said dredging the lower Niger and Benue rivers, can prevent recurrence and put an end to the horrific flood disaster afflicting the country.

Ms Eunice boldly proposed that the Federal and State governments construct dams along the Niger and Benue rivers. More importantly, Ms. Eunice said the dams constructed in this way would be used to irrigate agricultural land and generate electricity, creating jobs for citizens.