Edward Onoja; and the Nick of Time

When the story is finally told, it would be remembered that Edward Onoja was probably the most loyal Deputy to a Principal in Nigeria. 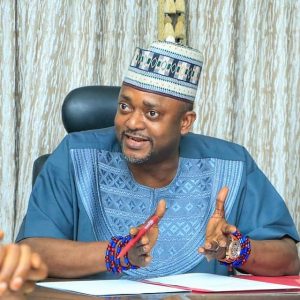 It would also be remembered that when he served, he did so in sheer grace and gusto. That when naysayers fanned imaginary embers of discord between him and Governor Bello, he was rooted in conviction, standing out amongst the lot in both words and actions.

The year is 2019 and Kogi State is on the cusp of a new political reality– Chief Edward Onoja was draped to assume office as Deputy Governor of the State with applause trailing his emergence in reflection of his lofty performance having formerly served as Chief of Staff to Governor Bello.

These milestones, as predicted by many, were propellers that would eventually usher the state on the duo’s leadership hinged on brotherly love and camaraderie with a vision to further deliver the dividends of democracy to the Kogi people.

Years after and still basking in youthful enthusiasm and mutual respect, the Yahaya Bello and Edward Onoja- tag team proudly stands out in the rollcall of governors and their deputies in Nigeria, despite copious reports that replete the mainstream and social media outlets of the frosty relationships suffered by governors and their deputies in the country. These altercations, typically, have gone to take negative tolls on the people they lead.

But Governor Bello and Edward Onoja stand as a clear departure. Despite ill-fated attempts to create fantasized enmity between him and his Principal, Edward Onoja has remained colossal in strategy to policies that benefit the Kogi people, breezy in the execution of assigned roles by his Principal, consistent in character, and diligent to duty. By and large, it is logical to infer that in the Olamaboro-born political virtuoso, Governor Bello found himself a heartthrob.

It is public knowledge that Edward Onoja has been the most vociferous voice of the New Direction Government in preaching the Yahaya Bello Gospel. Time after time, he exemplifies loyalty to friendship. Through service to brotherhood, he takes off his kaftan, puts on his overall clothing, rolls up his sleeves, and gets his hands dirty.

To bring his friend’s goal to fruition, he insists all hands must be on deck and all legs on the pedal. He turns nocturnal so his friend can sleep in comfort. He saunters into the lion’s den and stakes his head on the chopping board to absolve his friend from the fray. Don’t we all need a friend like Edward Onoja?

“…ever since I came on board, my brother, the Deputy Governor, Edward Onoja has been a pillar… There have been many Deputy Governors in Kogi State, but none has drawn more projects, development, and prosperity to his people than Edward Onoja,” Governor Bello recounted on the heels of the inspection and commissioning of projects in Kogi East recently.

With such affirmations being one, too many, they unequivocally become testimonials that Edward Onoja did it by winning more friends than enemies when he marketed Governor Bello to his ancestral region of Kogi State in wake of the 2015 elections.

He did it when he transversed the lengths and breadths of the country to galvanize support for the Presidential ambition of Governor Bello. He did it when he emptied himself into the embrace of nationalists, elder statesmen, market women, and artisans across the country for his Principal. He did it. He is doing it.

So when the story is finally told, the records will be fair to Edward Onoja. It would be remembered that he stood to his guns in friendship, commitment, diligence, and service. That he was probably the most loyal Deputy to a Principal in Nigeria.

Osaseyi Foundation Felicitates with Kogi Youth on the Occasion of International Youth Day Celebration -Makes a cash donation to Kogi NYCN for Renovation of Office Space.

Osaseyi Foundation Felicitates with Kogi Youth on the Occasion of International Youth Day Celebration -Makes a cash donation to Kogi NYCN for Renovation of Office Space.