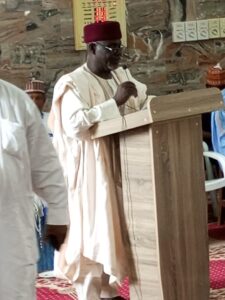 Alhaji Nasirudeen Yusuf gave the charge at the 1444 AH Hijrah Commoration Lecture as well as the unveiling the 1444 Hijrah calendar held at the Sharif Ishaq Aboki Mosque, Marine Road, Lokoja, called on Gov. Bello to declare every first day of Hijrah calendar as a public holiday.

The topic for this years Hijrah is: Everyone of is a shepherd and is responsible for his flock delivered by Imam Abubakar Yusuf- Abdullahi, of the Kogi State University Anyigba.

The Chairman particularly called on Gov. Yahaya Bello to like it has been done in some states of the federation, declare the first day of Hijrah calendar a work free day.

The Chairman described Hijrah as fundamental to Islam, reasons why it has to be given prominence, urged Muslim faithful to imbibe the lessons of Hijrah, urged Muslims to toe the path of peace in the outgoing year and craved for more in the New Year.

In a lecture delivered by Imam Abubakar Yusuf- Abdullahi, said aside defending its citizens from external attacks and internal disorder, called on government at all levels to enable individuals, man and women to realize their full potentials under the constitution in the social economic pursuits of their practical life.

While pointing out that no one leader occupies the seat of authority forever, the guest speaker says one vacates the seat for another to take over, described leadership as granted from Allah.

He urged leadership irrespective to take responsibility in their various societies to be mindful of Allah regarding there subjects, said every shepherd is responsible for his flock and they would be questioned and accounted for their responsibility towards the people they preside over in the days of judgement.

He urge leaders at home to train children to understand and have love for the prophet, particularly in the recitation of the holy Quran.

As lessons for leaders, he charged leadership at all levels to take responsibility’s, protect their flock, asked them to be patient in leadership, as well as have a better vision, described a better society as the foundation of a better society.