ATIKU, WIKE: GET BACK TO THE TALK TABLE

For now, nothing serves as a more eloquent wake-up call to the two leading parties, the All Progressives Congress, (APC) and the Peoples’ Democratic Party, (PDP), than last weekend’s development in Osun State. The loss of Isiaka Gboyega Oyetola, the Governor of the state on the platform of the ruling APC, against the run of play, is very instructive. It more than adequately punctures the myth of invincibility woven around his mentor, some say first cousin, Bola Ahmed Tinubu, the Asiwaju of Lagos, and the APC. On the part of the PDP, the development is a clear attestation to the need for unity of purpose towards such surprising electoral displacement at the national level, come 2023. 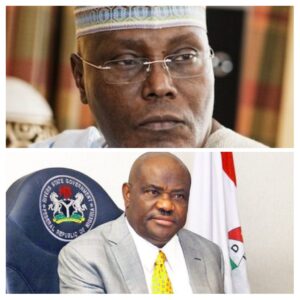 Give it to Nyesom Ezenwo Wike, Governor of Rivers State. More than any of his colleagues, he has very consistently and generously been forthcoming on the issues of support and rescue missions germane to the survival and sustenance of his party, the PDP. When he is not availing fiscal support for a plethora of legal tussles concerning the restoration of stolen mandates of members of his party, he is almost singularly funding conventions of the party. His heroic efforts towards the reelection of Godwin Obaseki of Edo State last year, are very well documented. Wike has been the poster boy of sustained loyalty and remarkable generosity to the PDP.

Wike’s anger about being jettisoned by Atiku Abubakar, former Vice President and winner of the recent PDP presidential primaries, as his potential running mate for the 2023 presidential election is very legitimate. Especially against the background of suggestions from Wike’s camp, that he was actually offered the opportunity in the course of the first post-primary meeting of both leaders. The blitzkrieg of Wike’s work-rate and the mileage he covered in just two months of his declaration to contest the Number One position, meeting leaders, statesmen and party delegates, will yet interest scholars of Nigerian politics. He surely has a bright future ahead of him as a politician.

Man, however, must be guided not to play Louis XIV, the legendary King of France, who declared in vain-glorious triumphalism, in French: *L’etat c’est moi,* meaning: “I am the state.”
I expect Wike’s anger to have thawed by now, weeks after the breathtaking primary. So should the discontent of his allies and strategists, notably Seyi Makinde, Samuel Ortom, Okezie Ikpeazu, Ifeanyi Ugwuanyi, Ayodele Fayose, Ibrahim Dankwambo, and Company. This is not discounting the verve and passion with which Wike was supported by several other cheerleaders, backstage, underscoring the depth of sympathy invested into his *ReNEW* Nigeria political project. The *NEW* acronym is the abbreviation of Wike’s names: “Nyesom Ezenwo Wike.”

I have been privately apprised about a novel, thought-provoking and inspiring initiative in political strategizing initiated, funded and experimented by some of Wike’s friends. The model, is indeed worthy of emulation and deployment by the Atiku/Okowa ticket, moving forward, from what I gathered. Sometime soon, the likes of Kingsley Chinda, TJ Yusuf, Solomon Bob, Rima Shawulu, Chukwuma Onyema, Solomon Maren, will yet share with Wike about the profound, behind-the-scene intellectual perspiration that went into the exercise. Wike diehards, are understandably disoriented and unhappy, in solidarity with their friend and brother.

It’s at least one month since his Delta State counterpart, Ifeanyi Okowa, was named Atiku’s pairing ahead of the 2023 election, by the way. Instructively, behind the backs of some of these top stakeholders of the PDP, the party has reclaimed the governorship seat in Osun State. This validates the Biblical saying that God can raise up stones to do his bidding, where man falters, (Luke 19: 40). And in the Osun case, erstwhile beneficiary of Wike’s goodwill, Obaseki, joined his Bayelsa counterpart, Duoye Diri and former Senate President, Bukola Saraki, to support Ademola Adeleke and deliver his victory. Life goes in circles, it oscillates in cyclical motions. Inspite of their absence individually and collectively from the Osun battleground, however, all PDP governors, pooled resources together in characteristic support for their own. Atiku reached out in the same manner too.

Now is the time to all congregate on the dialogue table to smoothen the jagged edges of recent developments and bad blood, between Wike and Atiku. In admonishing disaffected parties in the course of his global reconciliation efforts, former President Olusegun Obasanjo used to say: “If the need arises, I will lock both of you up in the same room and hold the key. Talk to yourselves, disagree with yourselves, box yourselves, agree with yourselves. Both of you should then knock the door together when you want me to open it for you. Let’s make progress therefrom.”

Atiku, please play the elder brother and statesman that you are. Lend credence to your global rating as a true mediator, pacifier and unifier. Get on your plane and go to Port Harcourt. Have a one-on-one, heart-to-heart discussion with your younger brother and co-PDP bulwark, Nyesom. Both of you are believers in a new Nigeria, where equity, fairness and justice denominate our sociopolitics. Dissent here, agree there. There are rumours Wike has committed to supporting a southern presidential candidate. This, it has been argued, is because the motivation for his plunging into the project was to avail the country a southern counterpoint to years of misrule the country has suffered especially under the incumbent administration. This could hurt his party, and let’s hope, not ultimately his own interests. Resolutions are better not made in fits of anger.

Expand the meeting the way Wike desires, to include allies of both sides. Shake hands and embrace each other with genuine warmth and passion. The infiniteness of the skies ensures that all birds can flutter and fly without grazing the wings of one another. The speedy resolution of the impasse between you both, is of paramount importance to Nigerians. They can almost not wait for you and your party to lead the dislodgement of the ruling party from Aso Villa, come February 2023.

In all of these, *Waziri Adamawa,* take due cognisance of the loud silence of certain critical stakeholders. Some may still be nursing hurts, arising from the outcome of the Saturday May 28, 2022 event at the Velodrome of the Moshood Abiola National Stadium, Abuja. Reach out to them, in all honesty and sincerity, rebuild rapprochement and get everyone under the very broad and accommodating umbrella, the logo of your party. Request, purposely, from your co-contestants at the primary, for operatives from their own campaign organisations, for incorporation into the Atiku/Okowa Project and get the train moving. Nigerians may yet give you and your party, an opportunity for penitence, come February 2023. Maybe just yet.

*Olusunle, PhD, poet, journalist, scholar and author, is a Member of the Nigerian Guild of Editors, (NGE).

The Arrest Of The Suspects Behind The Kidnapping Of Austin Idemudia: Ayen Community Calls On Government For Justice — Bassey Michael

The Arrest Of The Suspects Behind The Kidnapping Of Austin Idemudia: Ayen Community Calls On Government For Justice — Bassey Michael