The All Progressives Congress, APC, Kogi local government area of the State has maintained its lead as the true home of APC as it getting enlarged given the supporters of opposition People’s Democratic Party, PDP, who denounce their earlier memberships to identify with APC. 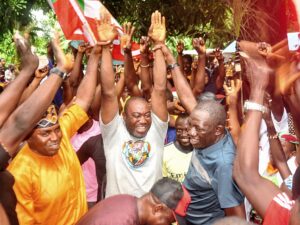 The people of Ozugbe and Akpaku communities in the Kogi Government Area were among thousands of decampees from the People’s Democratic Party, PDP, including their former and serving leaders. 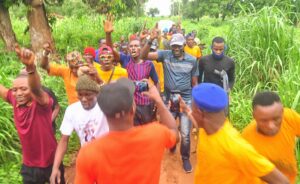 Supporters of the PDP in Akpaku and Ozugbe communities in South East, Kogi Local Government Area were today in their numbers received into the fold of APC. 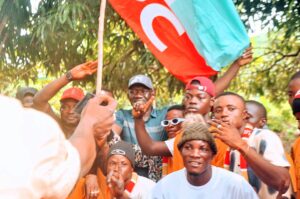 The highly elated former PDP supporters accorded the Commissioner and political leader of Kogi LG alongside his team a rousing reception, saying their decision to leave their former party was a result of Governor Yahaya Bello‘s impactful leadership quality exhibited over the years.

“Bello brought visible development in our LG, we saw reference hospital, we now enjoy relative peace, our sons are being appointed into key positions and some promoted in their various field of endeavors to work for the development of our host LG.

The group also said they left PDP for APC to support the Commissioner representing them at the State executive council, in the person of Engineer Muhammed Abubakar Bashir Gegu, and described him as a rare philanthropist whose gesture and dividends cut across the board.

Notable among those who defected were close allies of the PDP leader in Kogi LG and members representing Lokoja/Kogi federal constituency, Hon. Ibrahim Isah Shaba.

Kogi State Commissioner for Solid Minerals and Natural Resources, Hon. Engineer. Muhammed Abubakar Bashir Gegu described their move as the best political arithmetic in the history of the LG, that will eventually lead to more consolidation of positive development, and enhancement to win the 2023 general elections without further stress.

Engineer Bashir Gegu who received them on behalf of the Governor, assured of equal treatment, even as he said Alhaji Yahaya Bello will be briefed on the areas of their needs.

The residents of Akpaku and Ozugbe surged out in large numbers to welcome the Commissioner and his team.