2023: Okene/Ogori Magongo Project is Your Project, Says Tijani Oliver as He Meets Dr Ozomata In Closed-Door. 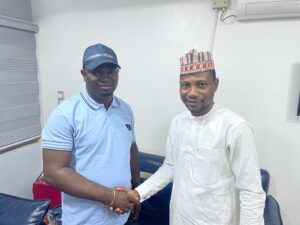 Okene/Ogori Magongo House of Representatives candidate of the All Progressives Congress, APC, Hon. Ahmad Tijani (Oliver), has on Wednesday visited his co-contestant and Coordinator of Agro-Processing, Agricultural Productivity Enhancement and Livelihood Improvement Support (APPEALS), Dr. Sanni Abdullahi Ozomata in his office in Lokoja, saying the project is his project, appealing to him to take it as such.

Tijani Oliver while describing Ozomata, he said he is a peaceful, committed and key party member whose effects are being felt by all, acknowledging that Okene and Ogori Magongo Federal Consitutuency would hit the celebrated peak with his support and the cooperation of all. He therefore believed on synergy as the only proceed to strengthen the progressive bond and winning for the party in landslide.

He added that, the purported rumor by a few that he detained one of your supporters was only a statement of incitement by people who detest the unity and progress of our party.

Welcoming the APC Okene/Ogori Magongo flag bearer, Dr Ozomata said, in a contest, only a person is allowed to emerge and irrespective of what might have transpired and the hearsays, he has never reneged his allegiance to his Party, APC.

“I took the fall-out in good faith and I will always use every opportunity to appeal to our party members and supporters to continue working round the clock to ensure victory for our candidates across board”, Dr Ozomata added.

The pre-election exercise (primaries) has come and gone. We shall be at the Grassroots as usual to lead the youths, women and everyone to ensure that we can win for our party convincingly. This is the only way our goal of quality representation, and giving everyone sense of belonging can be achieved. Dr Ozomata concluded.