Deepening democracy beyond the 2023 election by the media has been described as a task for the Nigeria media. 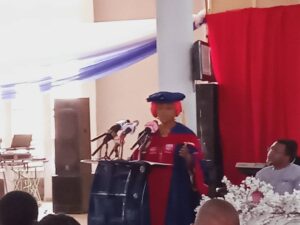 While pointing out that the media has a noble duty and responsibility to provide enough information and media consumption that will increase civic engagement by providing solid empirical evidence, it has a role in holding those elected accountable after the election as a way of deepening democracy.

While pointing out that the cure for ills of democracy is for more democracy, urged the media not to centre on the things that will undo the nation in the 2023 general election, but should look beyond the election by deepening democracy through citizens participation beyond the election circle in holding leaders accountable.

She described the media as a veritable tool that play crucial role and the backbone of democracy, said democracy is not all about electioneering campaigns and slogans, but said the four year period of governance should be relevant to the media,
stressed the need for the rule of law, accountability, need for divers voices of the poorest of the poor to be heard, called for the place of the new media with new voices, instituted and propagated, in order to make for better citizens and to run the nation better.

She called for Community media in promoting inclusion, strengthening democracy as well as the protection of the minority, tasked owners of media institutions in the country to as a matter of urgency, put the nation’s interest first and rise above their personal interests.

Mrs Abu urged the media to play the roles of enablers of democratic ideals through their media platforms by providing the necessary capacities and infrastructure for their staff to perform optimally.

According to her, media plays a crucial role in shaping healthy democracy, adding that it is the backbone of democracy, must carry out peer reviews on how well it has carried out it’s constitutional assignment vide section 22 of the Constitution.

” The media must be deeply knowledgeable to be able to provide the much needed illumination for citizens on their rights, and on issues of governance while holding leaders accountable, cautioned media owners against censorship and undue control.

According to her, voter education is critical to the sustenance of democracy, said it must not stop even after an election.