Share This:
The African Democratic Congress ADC, Yagba Kogi State has received large number of decampees from opposition political parties across the three local governments in Yagba Federal Constituency ahead of the 2023 general elections. 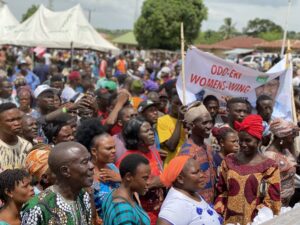 The House of Representatives Member from Yagba Federal Constituency and the National leader of the ADC, Hon. Leke Joseph Abejide received the new members as they openly declare to join the party. 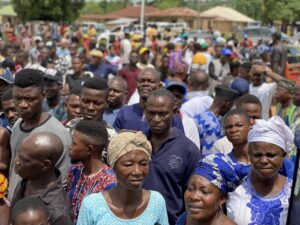 Leke Abejide described the defection of party faithful including key stakeholders from opposition political parties in Yagba as an indication of ADC’s predominance.

Remember, Hon. Tuesday Henry Abimbola a stalwart of APC joined ADC with his large supporters, he declared openly to join the party in his home last week.

Hon. Tuesday joined ADC officially and dumped the All Progressive Congress, while he pulled all his supporters to African Democratic Congress to support Leke Abejide for a second term.

Chief Asaje who was formerly an APC member alongside his large supporters openly renounced the APC and embrace the ADC, while speaking, he said, his decision to join the train of ADC stands on the achievements of Hon. Leke Abejide.

He itemised his motivations to join the ADC, the core centre of his reasons were the successes of Hon. Leke Abejide.

“I am ready to work and support Hon. Leke Abejide for the second term, based on his antecedents, we are ready to support and campaign for him”. He said.

Hon. Nike Akolade from Odo-Ere/ Oke-Ere/Akata ward a big fish from APC, former Yagba West SSA on Women and Children mobilization, also defected from the former party to join ADC, she said leaving APC was one of the best decisions for the betterment of Yagba and the people of Odo Ere, Oke-Ere Akata.

“APC has left us with no option but to join the ADC, we love what Leke Abejide of ADC is doing, he has been a detribalized leader that reaches to the people at the grassroots, irrespective of a political party. His openness is one of the key attributes that distinguish him.

“Our defection from APC in Kogi state is also based on the hunger and suffering the party has introduced to our people, we are tired of underdevelopment. We want to progress in our land, with what Hon. Leke is doing in Yagba, progress is obtainable.

The thousands of decampees are from all the 34 wards in Yagba Federal Constituency,  including Mr Charles, a youth frontrunner and former Youth leader in APC, Mr Olu Ologbon former Chairman of APC ward 03 Od Egbe and many other former executive members, stakeholders and supporters who s declared support for African Democratic Congress.

The representative of the YPP stated that the party is officially joining ADC to wax stronger and also deliver Hon. Leke and other state Assembly aspirants come in 2023.
Other members and stakeholders, officially dumped SDP, and PDP to officially join ADC.

Hon. Leke Abejide officially welcomed the decampees to the party, he appreciated them for joining the party while promising to run an open-door policy to accommodate all the decampees, he charged them to always work in the interest of ADC to promote its value for all to Arise and Shine.

He assured the new members of a sense of belonging in the party and charged ADC supporters and stakeholders across the wards to embrace and integrate the decampees into the fold.