… Describes Gov. Bello as a man after the heart of God because of his love for persons with special needs. 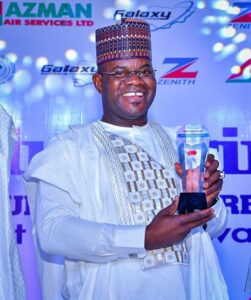 The Executive Secretary, Kogi State Office For Disability Affairs, Barr. Zacchaeus Dare Michael has on behalf of the disability community in the State congratulated Gov. Yahaya Bello on his well deserved POLITICIAN OF THE YEAR AWARD bestowed on him by the Blueprint Newspaper.

In a Congratulatory message, Barr. Dare on behalf of the disability community said that Gov. Bello deserves the award, described the Governor as a man after the heart of God because of his love for persons with special needs.

Barr. Dare commended the Organizers of the Award for being just in their findings before reaching the conclusion, called on other organizations to sustain the good works of rewarding commitment and responsiveness as displayed by Gov. Bello, a feat that earned him the award.

Governor Yahaya Bello on Tuesday in Abuja, bagged the POLITICIAN OF THE YEAR AWARD by one of the nation’s prominent newspapers, the Blueprint. According to the Organizer, the Award was in recognition of the Governor’s outstanding leadership qualities and decisive handling of the security situation in the State and active political participation over the years.