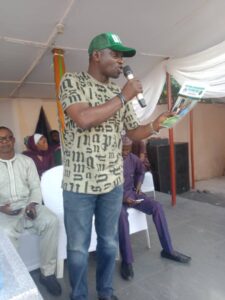 The solidarity support was declared during the association’s press conference chat with different media outlets by the Student’s Leaders and Traditional Rulers of the various NATIONAL ASSOCIATION OF OFU STUDENTS in various Tertiary Institutions having thoroughly, judiciously and sincerely scrutinized & assessed some of the philanthropic contributions and achievements of Engr Mohammed Kebiru Abdullahi (KB) in the area of Students Welfare, Encouragement, empowerment and other forms of social, economic and academic assistance in the lives of OFU STUDENTS in all schools, colleges and tertiary institutions in the state and beyond.

ENGR. MOHAMMED KABIR ABDULLAHI (KB) who was at the occasion of ANNUAL OFU DAY CELEBRATION/INAUGURATION OF NEW EXECUTIVES believed that every student deserves quality and sound education for every career he/she choices to enable him/her function well and compete favourably among his/her contemporaries and also give back best to the society in his/her various life endeavours after school.

He also educate the students that best/lucrative job go to the best graduated Students that are well educated, results oriented and research equipped in discoveries of new ideas, technological concepts development and functional mental reasoning achievers. That is why he supports many students achieve their goals academically, materially, financially mentioned but a few.

We believe he will do more in these gestures if giving the opportunity to serve his people at the floor of Kogi State House of Assembly come 2023. Ofu people will be represented adequately, efficiently, effectively, brilliantly, sufficiently, meticulously and meritoriously in the next dispensation of Kogi State House of Assembly which will bring dividends of democracy to the good people of Ofu LGA.

Engr Mohammed Kebiru Abdullahi (KB) is vocal, vibrant, courageous, energetic, approachable, responsible, presentable, educated enough to vie and bobby for infrastructural development, social amenities, health services/hospital equipment and many others for the people of Ofu LGA. We will support him, be with him, stand with him until the day he will be declared as the winner Kogi State House of Assembly election come 2023 representing Ofu constituency by the special grace of Almighty God.