NAKOSS NATIONAL LAUDS MR RICHARD OSASEYI’S KIND GESTURES AS HE DOLED OUT 2 MILLION NAIRA TO KOGI PUPILS IN OKORO-GBEDE, ENCOURAGES HIM TO DO MORE THROUGH THE OSASEYI FOUNDATION, BAGGED EDUCATION PHILANTHROPIST OF THE YEAR 2022

Jul 16, 2022 BAGGED EDUCATION PHILANTHROPIST OF THE YEAR 2022, ENCOURAGES HIM TO DO MORE THROUGH THE OSASEYI FOUNDATION, NAKOSS NATIONAL LAUDS MR RICHARD OSASEYI'S KIND GESTURES AS HE DOLED OUT 2 MILLION NAIRA TO KOGI PUPILS IN OKORO-GBEDE 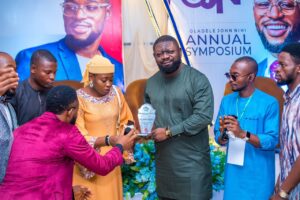 Consequently, elites who makes meaningful contribution to education in our society must be seen as gold and great human assets for the fact that their contributions helps meaningfully in building the next generation and as well assist in sustaining societal value

It’s in this regard that the leadership of NAKOSS send gratitudes to Mr Richard Osaseyi, the CEO of Osaseyi Foundation that doled out the sum of Two Million naira in cash to support public school students of Okoro-Gbede, Ijumu L.G.A of Kogi State

The President of the association, comrade Rachael Mojirola Balogun noted that “It is a good gesture and an examplary humanitarian and leadership responsibility that Mr Richard displayed by undertaking such services to assist parents of these students which definitely has lessened their burdens”

The President further stressed that “Such behavior is highly commendable and well recommended for worthy citizens of Kogi State to take cue from, especially for the fact that we can collectively through community services build the Kogi of tomorrow that we all dream of”

In her closing remarks, Comrade Mojirola enjoined Mr Richard Osaseyi to be encouraged and never relent in extending his good gestures for the promotion of the state, especially in the education sector.