Hon. Sunday Karimi, the All Progressives Congress Flagbearer for Kogi West Senatorial District alongside, Aaremo Jide Omokore today visited the Elegbe of Egbe Palace in his palace at Egbe. 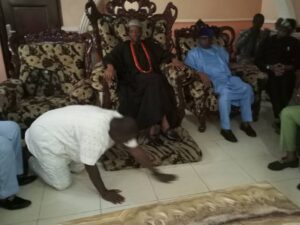 The APC Flagbearer said he is in the palace to seek the Royal blessings, described the Elegbe as a quintessential traditional ruler under who’s reign sons and daughters of the area have excelled. 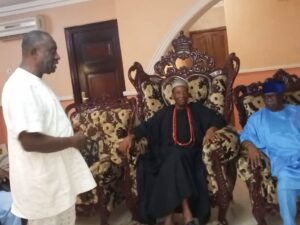 He assured the Royal father that he would strive to uphold the good name of the Kingdom, promised to be a worthy ambassador.

He assured that if elected he will legislate on how traditional ruler would be assigned constitutional roles, described Oba Irukera as a father to all.

The APC Flagbearer promised not to disappoint the people if elected, assured of quality representation and expressed optimism that Kogi West under his representation would witnessed quantum leap.

The Royal father blessed the APC Flagbearer, wished him well in his aspiration.