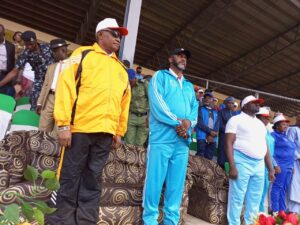 The governor who was represented by his Deputy , Chief Edward Onoja stated that, Kogi State government was delighted to host this year all important sport competition and assured the August visitors to the Confluence State to take advantage of the serene environment to unwind and relax as work without play makes Jack a dull boy and encourages the judges and other judicial officials participating in the games to take maximum benefit of the holiday by judges in the country to visit some of the tourist attractions in the state.

According to Chief Edward Onoja,Kogi State is safe and is one of the savest states in the country and that he is ready to sustain the height for the comfort and prosperity of all.
It could be recalled that similar event was hosted by the same administration in 2016, and the contingents went about their sporting activities peacefully from the beginning to end and such feat is expected to be sustained this year.
The Confluence news reports that,the Acting Chief Judge of the Federation, Hon. Justice Olukayode Ariwoola CON , was represented by the Acting Chief Judge of Kogi State, Hon. Justice Josiah Majebi along with other High Court Judges from Kogi State and other judiciary officials across the country.
Fifteen states participated in the march past, the first position went to Court of Appeal, second position, National Judiciary Commission while the third position went to Federal Judiciary Service Commission respectively.
Kogi State Judiciary participated in the foot ball competition against Supreme Court, Abuja with two goals against Kogi State judiciary.
The tournament is expected to last for 10 days with about 11 sports to be competed for.