The Acting Chief Judge of Kogi State, Hon. Justice Josiah Joe Majebi, performed his first assignment of administering oath since he assumed office, when he swore-in Chief Nathaniel Ajigi at the headquarters of the state Judiciary in Lokoja yesterday. 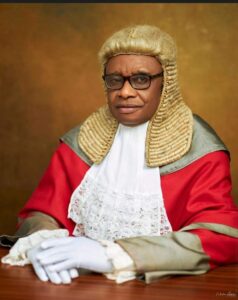 He administered the oath of Notary Public on Chief Ajigi whose appointment as Notary Public was made by the Chief Justice of Nigeria (CJN).

The Acting CJ admonished the appointee to be of good conduct and shun corruption even as he told him not to make “access to the Notary Public services too costly to the common man”.

He however acknowledged that Chief Ajigi merited the appointment owing to the sterling qualities he possessed and has demonstrated over time and expressed confidence in the new Notary Public to discharge his duties efficiently.

“I know that this well-merited appointment of Mr. Nathaniel Ajigi Esq. was made possible because of honesty, dedication to duty, candour and belief in the rule of law.

“Therefore, I am not in doubt that you will abide by the requirements as contained in the second schedule of the Notaries Act, Laws of the Federation of Nigeria, administered on you” he said.

He asked the newly sworn-in to be fully committed as an officer of the Supreme Court of Nigeria “imbued with some powers and responsibilities.”

“I charge you, as good ambassador, to undertake the discharge of your duties with integrity, diligence and total commitment bearing in mind that one is not known by the toga one wears but by performance and public assessment” he added.

Chief Nathaniel Ajigi, the Obamuyiwa of Oweland and the Ogrima of Okpreke, was born in March 1963 in the ancient town of Gbeleko-Kabba in Kabba Bunu LGA of Kogi State. He obtained his LLB in 2006 from Kogi State University, Anyigba and was called to Bar the following year. He is the principal partner of Ajigi, Ajigi Jurisconsult & Co and a member of the Lokoja brach of the Nigerian Bar Association.

In his response, Chief Ajigi appreciated the CJN for the appointment and the Acting Chief Judge of Kogi State for administering the oath after thanking God. He promised not to disappoint his appointing authority, Kogi State and the country at large.

The swearing in event was witnesses by Hon. Justice Etsu Umar and family members and friends of the newly appointed Notary Public.