Political will and lack of commitment on the part of political leaders at all levels is what is contributing to insecurity and insurgency to persist in the country. 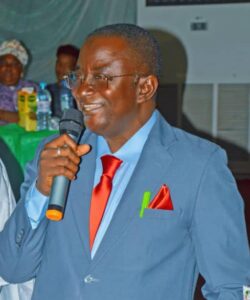 The former General officer commanding 3 Division of the Nigerian Army Brigedier General Bello Abdullahi Mohammad rtd in an interview in minna observed that lack of political will and commitment of our leaders is responsible to the increasing rate of security challenges in the country.

He stressed that government has all it takes to put an end to the prevailing security challenges in the country.

He mentioned that government at all levels should as matter of urgency use the appropriate security instruments as enshrined in the Constitution to safeguard the lives and properties of the citizens.

Brigedier General Bello Abdullahi rtd explained that as a result of the absence of government at the top was the reason some of the state Governors are clamouring for the state Police.

He stressed that if state police is esterblished it will enable  Governors to monitor and address some of the immediate security challenges in their various states not until they received directives from the above.

He pointed out that the President as Commander in Chief and Governors as the Chief security officers of their respective states are incapacitated as they are just like”toothless dogs that can bark and can’t bite”,as without directives from the above they can not act to some of the immediate security challenges in their states.

He advised that the 1999 Constitution as amendment, the powers of the Governors as enshrined there in,is not enough if the prevailing security and insurgency challenges some state are bedevelled with are to be tackled.

He equally observed that traditional tittle Holder and religious leaders should be carried along if government really want to put an end to the menace,”this group of people are at the receiving end,they know their people and know the bad people and stranger among them”, hence need for synergy with them.