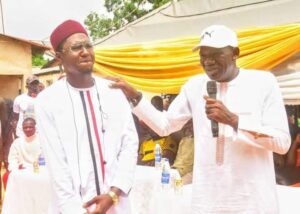 The Commissioner for solid minerals and natural resources, Engr. Muhammed Abubakar Bashir Gegu has called on leaders at all levels to emulate Governor Yahaya Bello of Kogi by setting aside special grants for youths to boost their God-given potential and development.

The Commissioner made this known at a music album launch ceremony in honor of Mhr General, , held in Gegu Beki district of Kogi local area of the State on Saturday.

According Engr. Bashir Gegu, such grants would go a long way in curbing crime and boost young artists to take off and start selling their products and earning a living.

The youth-friendly Commissioner noted that all Governor Bello’s appointees have been told to represent the Governor at their various respective LGAs and Communities as an ambassador of change, which Governor Bello represented throughout his years in government.

Engr. Bashir Gegu said Governor Bello being a youth-friendly leader will continue to accord necessary support that will enhance their capacity.

“I am here today to demonstrate the true love of Governor Yahaya Bello, he is a father of all with all sincerity of purpose.”

The elated Commissioner for Solid Minerals handed over one million and three hundred and fifty thousand nairas (1.350), to Mhr General to appreciate him for using his talent to support and promote GYB’s gospel.

He revealed that Mhr General has released many albums mainly for promoting GYB, APC, and Egbira Traditional Institutions.

Bashir Gegu also said that there are other packages for artisans across Kogi local government area as part of the present administration to boost their works and made them self reliance.

“The present government under the leadership of Alhaji Yahaya Bello is committed to providing additional grants to assist artisans in Kogi local government to enhance their capacity.”

The Gegu Beki-born grassroots politician when further to name those that will benefit from the next grants, which are, Footballers, Electricians Mechanics, painting, fashion designers, bead makers, and cake bakers and among others.

He said students, youth, and women will also be empowered to enhance their capacity.

“Grants are important because they will help to support artists for some time before they are stabilized,’’ he said.

While appreciating the Commissioner’s gesture, Mhr General said the grant will help him and many other artists with whatever they can do to enhance their jobs or get them started with their chosen careers,’’ he said.

The Egbert native artist applauded the Commissioner for using his good office for doing its best by assisting some of the artists and called on other leaders in Egbira land to do all they could to take arts and culture to another level.

“With what Engineer Bashir Gegu is doing for artists across Egbira land, the industry would head for greater heights, locally and internationally, with some push from relevant stakeholders.”

The artist who broke down in tears in presence of the crowd expressed gratitude to Engineer Bashir Gegu and promised to judiciously use the money for the purposed it is meat for.

He prayed to Almighty God to grant the Commissioner the protection, guidance, sound health and grant him his heart desires.

Global Times Nigeria reports other speakers at the event said arts as a career sets people thinking wisely, brings about creativity and promotes technology which simply indicates that it is a powerful tool for growth.

“Creativity will help this country grow, that is why I am campaigning for grants for artists so that things can relatively be easy for them.”

The event had in attendance, National rulers, politicians, youth, and women groups in their thousands.