Nigeria’s Tobi Amusan has won the gold medal in the women’s 100m hurdles at the 2022 Commonwealth Games. 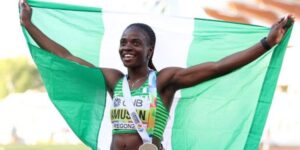 NIGERIAN POST reports that Amusan became the first Nigerian athlete to win a World Athletics Championship gold when she stormed to victory in the women’s 100m hurdles in Oregon last month.

The 25-year-old, who had obliterated the world record in an astonishing semi-final where she clocked 12.12sec, powered over the line at Hayward Field in 12.06sec.

Then in Birmingham, United Kingdom on Sunday, Amusan showed her outstanding performance in Oregun was not a fluke.

The world champion successfully defended her title at the Alexander Stadium on Sunday in the women’s 100m hurdles final.

The Nigerian was able to run a Games record of 12.30s, setting other records as well, and becoming the first world champion to win gold and the first Nigerian athlete to do the same.