It was a moment of political re-alignment and redefining in Agbenji Ajikagbo in Ojikpadala ward of Okura state constituency ,Dekina local government area as hundreds of ardent supporters and relevant bigwits of the opposition People’Democratic party loyalists cross carpeted into the ruling All Progressives Congress. 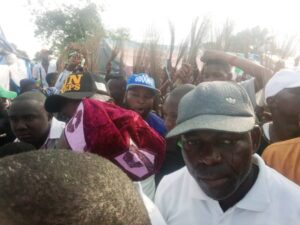 The ancient town of Agbenji Ajikagbo Community was at locked down as vehicular movements were hindered as party‘s supporters and admirers of an eminent son of the community and Director General ABAT-PCC for Okura State Constituency and All Progressives Congress Chieftain, Hon.Andrew Onu Adama thronged out in their thousands to have a glimpse of him and equally give him a rousing welcome

The communicative and epoch making ceremony which was held on Saturday the twenty four of this month at Agbenji Ajikagbo , according to the Ward chairman of the party and the counsellor representing ward,Hon.Rose Marry Michael and Alh.Musa Shaibu disclosed that defectors took the decision to enable deliver hundred votes for Tinubu/Shettima Presidency, Senatorial,House of Representative and Okura State constituency seats in the next year’s elections.

While officially receiving the new entrance,the chairman of Dekina local government area,Prince Isaiaku commended them for taking the wise decision asserting that in the party there are no new comers but will be treated equally.

While addressing the mamoth crowd of ardent supporters,core stakeholders and thousands of defectors at his ancestral home country -Agbenji Ajikagbo venue of the event, the Director General ABAT-PCC for Okura State constituency,Hon. Andrew Onu Adama congratulated the defectors for the wise decisions they have taken .

DG ABAT-PCC for Okura State constituency assured the party organs that with the massive turnout of supporters of the opposition people’s Democratic party leaving their former party abode for All progressive Congress the coast is now clear for them to deliver hundred percent votes for the party‘s candidates come next year’s elections.

Hon. Andrew Onu Adama also acknowledged the gargantuan in-roads made by the state executive Governor, Alh.Yahaya Bello’s administration in the angle of human and infrastructural development asserting that his monumental and verifiable achievements spanning the three Senatorial districts of the state are major selling points of the party to campaign on.