A Socio Political group,
Nigerian women in politics (FONWIP), has lunched a massive sensitization excersise on the ongoing INEC registration in Edo state,by moving from one market to the other ,telling the people the need for them to register and have their Permanent Voter’s Card, PVC. 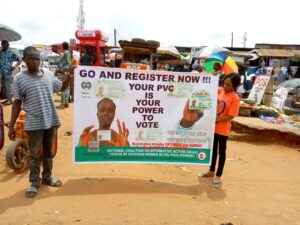 The group, led by the President, Honourable Florence Igbinije , a former commissioner of women affairs and social development in Edo state, led the members on the road work.

Honourable Igbinije, who single handedly sponsor the outreach with the printings of enlightenment flyers shared in market , public places and motor parks, with banners strategically placed in markets and parks including the Edo state INEC office.

In her message,” she called on every eligible Edo people to go out and register in order to be able to vote in the coming general election come 2023.

“she advice those with damaged PVC to visit the INEC website for a replacement “.

According to her, (FONWIP) decided to embark on the outreach, because many Nigerians felt is not necessary, but I say it clear to everyone that having your PVC gives you the right to Vote and decide who govern you. Permanent Voter Card, (PVC), is your right, go and get yours.” She concluded.

Enlightenment flyers were shared to both men, women ,boys and girls along the places.