The Nigeria Immigration Service, Kogi State Command has received accolades from citizens and customers for making processing and collection of passport stress-free and within a reasonable time. 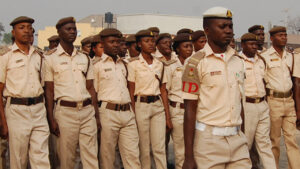 Speaking with the Nigerianpost, Baiki Tunduwa and Hassan Usman Paki who’s family members left for Hajj from the State, praised the ability of the NIS for making the issuance of passport stress-free, urged the Command to sustain the achievements.

Similarly, Mrs. Ukwe Boyi and Samson Ladi, added that the courtesy displayed by Immigration officials in the state when you visit the command, unlike in the past when you approach them to process passport, has been greatly enhanced, a development they so much appreciate, praised them for making service delivery a priority.

Another commendation the NIS Command in the State received was in its ability to curtail the activities of touts and middlemen who over the years have inflicted pain on customers, expressed appreciation that it is now a new ball game in the command as you hardly hear of such occurrences, while booklets are readily available for customers.

Still basking in the changes introduced by the command which has made them earn the accolades of citizens according to majority others spoken too, is the correct pricing of passport, lauded the leadership of the Controller, Musa Taiwo in making the command to make service to customers priority.

The citizens and customers expressed appreciation to the Controller of the Command, pointing out that the command now wears a new look, with friendly dispositions to customers.

The indigenes of the State lauded the Command’s efforts in the profiling of foreign nationals, an effort that has greatly reduced the level of insecurity in the state.

Those who spoke on the transformation witnessed in the Kogi State Command equally praised Adebola Adetula the PCO for bringing in his wealth of experience to bear in the seamless issuance of passport.

Without mincing words, a visit to the NIS Command in Kogi State point to the fact that begining from the rank and file, it is a new order to make service delivery a priority.

The citizens and customers praised the leadership of the Acting Comptroller General of Nigeria Immigration Isah Jere Idris for the good work the Nigerian immigration services is carrying out across the country.